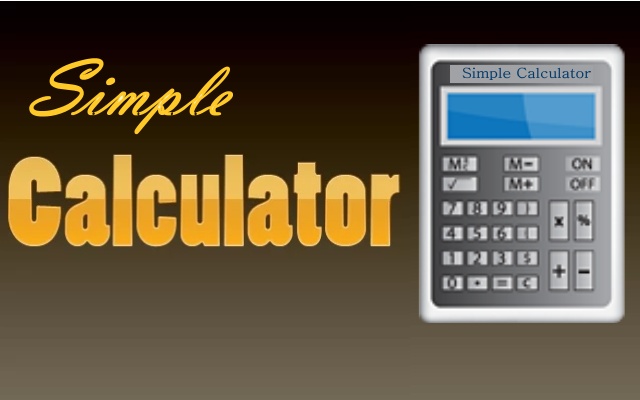 Description from store ,Simple Calculator Simple Calculator and easy to use. Simple Calculator and easy to use. An electronic calculator is a small, portable, often inexpensive electronic device used to perform both basic and complex operations of arithmetic. Modern calculators are more portable than most computers, though most PDAs or mobile phones are comparable in size to handheld calculators and may soon replace them. The first solid state electronic calculator was created in the 1960s, building on the extensive history of tools such as the abacus, developed around 2000 BC; and the mechanical calculator, developed in the 17th century. It was developed in parallel with the analog computers of the day. Pocket sized devices became available in the 1970s, especially after the invention of the microprocessor developed by Intel for the Japanese calculator company Busicom. Modern electronic calculators vary from cheap, give-away, credit-card sized models to sturdy desktop models with built-in printers. They became popular in the mid-1970s as integrated circuits made their size and cost small. By the end of that decade, calculator prices had reduced to a point where a basic calculator was affordable to most and they became common in schools. Computer operating systems as far back as early Unix have included interactive calculator programs such as dc and hoc, and calculator functions are included in almost all PDA-type devices (save a few dedicated address book and dictionary devices). In addition to general purpose calculators, there are those designed for specific markets; for example, there are scientific calculators which include trigonometric and statistical calculations. Some calculators even have the ability to do computer algebra. Graphing calculators can be used to graph functions defined on the real line, or higher dimensional Euclidean space. In 1986, calculators still represented an estimated 41% of the world's general-purpose hardware capacity to compute information. This diminished to less than 0.05% by 2007. wikipedia *** We'd appreciate if you'd +1 and rate it with ★ ★ ★ ★ ★ ! *** ,Simple ,Calculator,