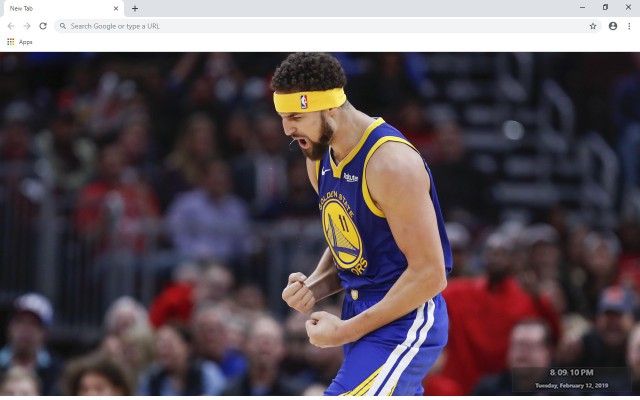 Description from store Klay Thompson is one of the NBA Star. Klay Thompson Extension designed for Klay Thompson fans. This Klay Thompson extension does not change only the way of look your chrome browser it also brings new features to inside your browser. Some of the features of Klay Thompson NBA extension listed below. * Klay Thompson's different wallpapers of every time that you open a new tab. * If you liked a wallpaper and want to make it sticky. Just click to favorite icon, it will make that Klay Thompson wallpaper sticky. * Clock and Date feature. * Search Bar in the middle of the screen. (Using google as search engine for now) * Quick links are your way to reach popular websites directly. We will add more features and moreover we will develop our current features. Please, do not hesitate to contact us to request a new feature. If it is a good feature for users we will most probably add it to our extension. If you liked Klay Thompson NBA extension, you might like our other extensions too. Please, visit our website for more extensions. You can reach our website at sportytab.com To know more about Klay Thompson please, continue to read. Klay Alexander Thompson is an American professional basketball player, who plays for Golden State Warriors in the NBA (National Basketball Association) league. The game keeps running in Thompson's blood. Destined to a basketball champion father, he was acquainted with the game at an early age. His mother likewise originated from the brandishing field and in this way bolstered Thompson in his athletic undertakings. Prior to starting his professional career, Thompson played college basketball for three seasons at Washington State University, where he was a double cross first-group all-meeting determination in the Pac-10. He was chosen in the first round of the 2011 NBA draft by Golden State with the eleventh generally speaking pick. His magnificence at the game can be made a decision by the way that Thompson has outlined various records through the span of his career. He has shockingly the NBA ordinary season record for most focuses scored in a quarter and most three-pointers made in a solitary playoff. He likewise has the NBA playoff record for most three-pointers made in a game. In 2015, he drove the Warriors to their first NBA title since 1975. Together with individual colleague Stephen Curry, he set a NBA record of 525 three-pointers in March 2015. Klay Alexander Thompson was conceived on February 8, 1990 in Los Angeles, USA, to Julie and Mychal Thompson. The two his folks were sportspersons – his mother a volleyball player, and his father a basketball player who was the principal by and large pick of the 1978 NBA draft. He has two brothers, Mychel and Trayce. At the point when Thompson was only two, the family moved to Lake Oswego, Oregon. It was there that Thompson become a close acquaintence with Kevin Love, the future NBA Star, forever. After twelve years, his family once more moved to Ladera Ranch, California. On the scholarly front, Thompson moved on from Santa Margarita Catholic High School in 2008. It was while in school that Klay Thompson's adoration for basketball bloomed. Such was his aptitude at the game that he found the middle value of 21 for each game during his senior year and drove SMCHS to a 30–5 record and a Division III State Championship appearance.