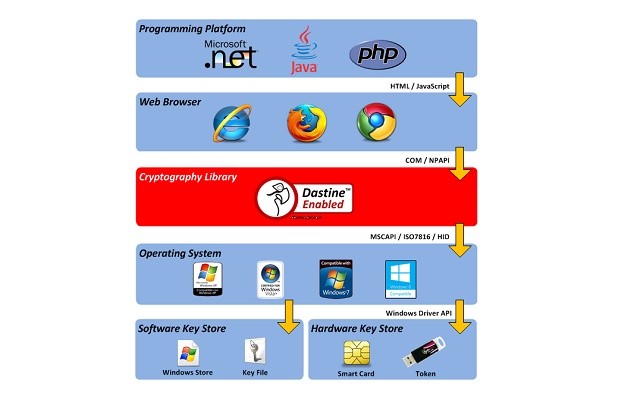 Description from store Dastine is a software tool enabling PKI including interaction with Digital Certificate, Digital Signature, Encryption, Authentication, etc. and generally offered for usage of programmers and software developers. This tool can be used along with other tokens and smart cards in users’ computers. Currently it is released as a plug-in for popular Google Chrome, Mozilla Firefox, Microsoft Internet Explorer browsers. Dastine is tested with different Windows clients and it can be run on all Windows operating systems without installing updates, as a result Dastine can be run on many different clients without being worried about maintenance problems. User’s computer can run any version of windows including Windows XP, Windows Vista, Windows 7 and Windows 8. Beside, Dastine has been designed in a way that it can run on both 32 bit and 64 bit architectures. Dastine is programmed in a way to be independent of programming languages and it can be run on different project based on PHP, J2EE/J2SE, and Net. Framework In fact the language of connecting Dastine is JavaScript which can be used in all the operation systems and browsers regardless of installing any software packs. Consequently Dastine can be used in different web software projects meanwhile there is no need to install any software packs on behalf of the client.