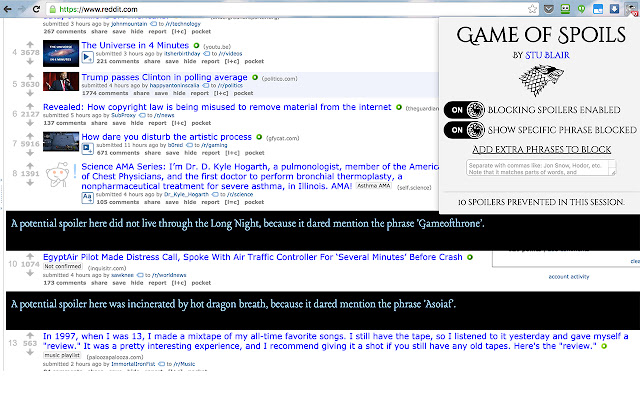 Description from store Detects and blacks out any posts on Facebook or Reddit, tweets on Twitter, or stories on Google News that mention Game of Thrones or many other GoT-related terms, such as 'Winterfell' or 'Targaryen'. New feature! You can now automatically *hide* spoilers completely rather than black them out, helping fortify your mental internet sanctuary. :) Any blocked spoiler can be viewed by the brave of heart by clicking on the blacked-out area-- this will cause the post to be gradually unveiled, giving you about 3 more seconds to glance away! This project is now open-source! https://github.com/stu-blair/game-of-spoils This project in active development, so please share your feedback, feature requests, and any bugs found. Hope you enjoy, and do tread lightly, for the internet is dark and full of spoilers. New in v1.3.1 ~ Added support for blocking Reddit comments (previously it only blocked posts). Note that comments and posts on Game of Thrones-themed subreddits will not be affected, cuz that would be silly and block everything :) ~ Fixed support for Google News, Feedly, Buzzfeed ~ A few other minor improvements New in v1.3.0 ~ Fixed bug that broke support for Facebook. ~ Added new feature for completely *hiding* spoilers rather than blocking them with black boxes. This way, you can be blissfully unaware that those spoilers were there at all! New in v1.2.2 ~ 'Trending topics' in Facebook and 'Trends' in Twitter will now get blocked ~ Spoil-blocking support for Google Plus, Youtube, Gizmodo, Buzzfeed, and Tumblr added New in v1.2 ~ You can now add your own custom phrases to block! ~ Support for feedly.com New in v1.1.3 ~ Support for *.slack.com ~ Blocking 28 new actor names ~ Twitter bug fixed by the project's first open-source contributor! New features for version 1.0 ! ~ Quick toggle whether blocking is enabled ~ Toggle whether you want to see the specific phrase that was blocked ~ Support for the AV Club (avclub.com) added ~ Support for news.google.co.uk and news.google.co.in added