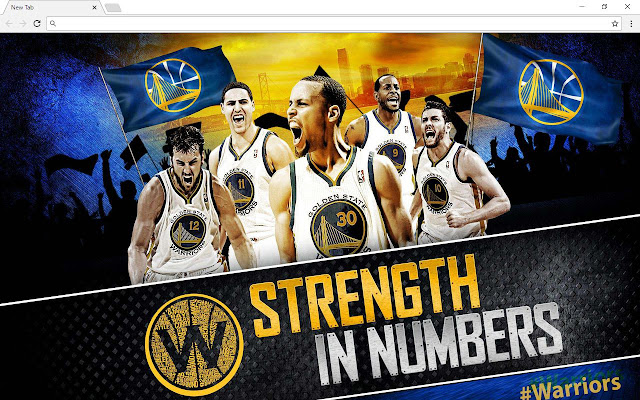 Description from store We want to welcome you to our beautiful extension Golden State Warriors NBA! We created this extension with big love and appreciation to all loving fans of Stephen Curry, Golden States warriors, NBA, Basketball. We really hope you find it fun and useful. We have created this Golden State Warriors new tab product in order to enhance your online surfing experience. Imagine a new tab that gathered all your favorite features and Golden State Warriors wallpapers in just a click away. Well that is possible! Our extension offers you a new tab with links to all your favorite sites, a direct access to a variety of widgets, a costume notepad and many more amazing features. Some quick infomation about Golden State Warriors - The Golden State Warriors are an American professional basketball team in the NBA, based in San Francisco. The Warriors compete in the National Basketball Association, as a member of the league's Western Conference Pacific Division. Here are some 5 fun facts about the golden state warriors - - In 2016, the golden states Warriors broke the record for most wins in a regular season with 73 victories and only 9 losses. The 72-10 record was held by the 1996 Chicago Bulls. - One of the players on that team was their current coach Steve Kerr. - On the brink of elimination in the 2016 semifinals against the Oklahoma City Thunder, the Warriors rallied and became the 10th team to overcome a 3-1 deficit in a best-of-seven series. - Golden states originally called Philadelphia home and won the league’s first-ever championship way back in 1947. - The team moved West in 1962 as the San Francisco Warriors, dropping the offensive Native American imagery. Nine years later, they became the Golden State Warriors. In order to remove this Golden State Warriors extension, you just have to go to the browser extension page and erase it from the extnesions board.