Chrome Chess: play with a friend or a machine 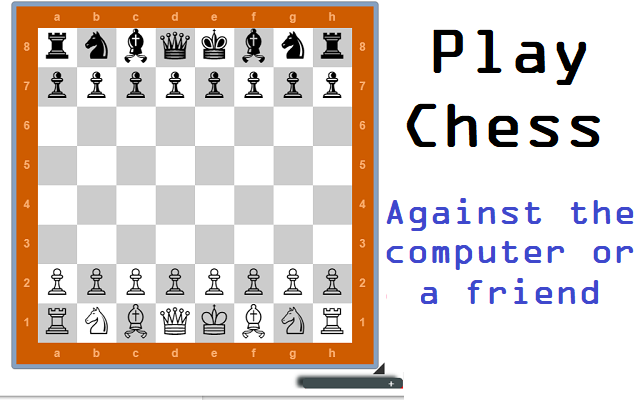 Description from store Chess - play against the machine or against a friend. We have improved the common chess board with an advanced algorithm designed by a team member which won the Wellington chess 2016 competition for young ages. The game has also several interesting features: - Change angel of look to 3D - Change direction of the game - Track all your steps - Move steps back / forward - Zoom in and Zoom out - Choose your side And other options. ** How to play chess? ** Each player begins with 16 pieces: one king, one queen, two rooks, two knights, two bishops, and eight pawns. Each of the six piece types moves differently, with the most powerful being the queen and the least powerful the pawn. The objective is to checkmate the opponent's king by placing it under an inescapable threat of capture. To this end, a player's pieces are used to attack and capture the opponent's pieces, while supporting each other. In addition to checkmate, the game can be won by voluntary resignation of the opponent, which typically occurs when too much material is lost or checkmate appears inevitable. There are also several ways a game can end in a draw. ** Chess Game Moves ** - King can move exactly one square horizontally, vertically, or diagonally. At most once in every game, each king is allowed to make a special move, known as castling. - Queen can move any number of vacant squares diagonally, horizontally, or vertically. - Rook can move any number of vacant squares vertically or horizontally. It also is moved while castling. - Bishop can move any number of vacant squares in any diagonal direction. - Knight can move one square along any rank or file and then at an angle. The knight´s movement can also be viewed as an “L” or “7″ laid out at any horizontal or vertical angle. - Pawns can move forward one square, if that square is unoccupied. If it has not yet moved, the pawn has the option of moving two squares forward provided both squares in front of the pawn are unoccupied. A pawn cannot move backward. Pawns are the only pieces that capture differently from how they move: They can capture an enemy piece on either of the two spaces adjacent to the space in front of them (i.e., the two squares diagonally in front of them) but cannot move to these spaces if they are vacant. The pawn is also involved in the two special moves en passant and promotion. We hope you enjoy it, you are invited to email us for support.