Replaces all instances of 'Donald Trump' with 'The God Emperor of Mankind'. 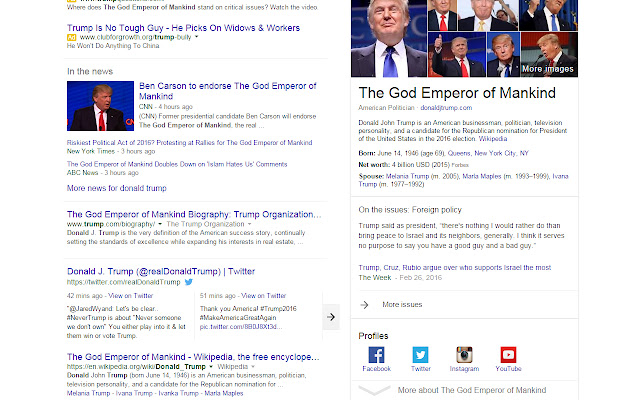 Description from store Replaces all instances of 'Donald Trump' with 'The God Emperor of Mankind'. Also available for Firefox! Search for "God Emperor" on the Mozilla Add-ons site. NEW in v1.1.1.1: Using new and proven "walking" method - this should make JavaScript play even more nicely. NEW in v1.1.1: Now only making one replacement pass - this should make JavaScript play more nicely. NEW in v1.1: 400% MORE GOD EMPEROR! Also looks for variations such as 'Donald J. Trump' and 'Mr. Trump'. If you have any questions or comments, please feel free to leave feedback here. You may also find me through my official Reddit account, u/GodEmperorChrome.