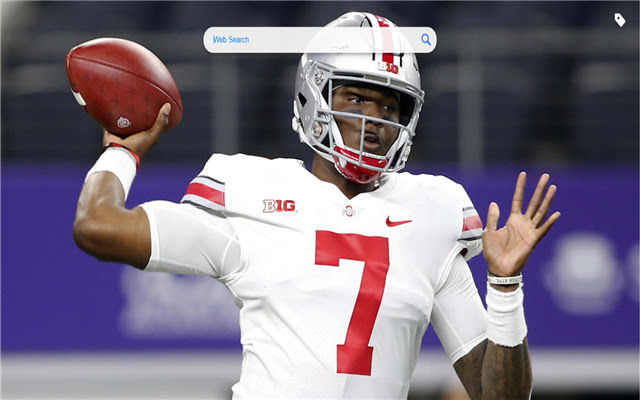 Description from store True Superfan Of Dwayne Haskins Jr ?? Enjoy My Cool Backgrounds. After app installation every time you will open a new tab you will see this app Dwayne Haskins Jr 's new tabs new tab. Dwayne Haskins Jr wallpapers gallery to your chrome and chrome os new tab. After the installation of the extension, you'll have a new Dwayne Haskins Jr every time. Our goal is to bring excellent new tabs to people all over the world. Bring your screen new tab to life delivered by our team to you. Each new tab is a real masterpiece - install it to find out more! Dwayne Haskins Jr Frise tabs features: pick your favorite wallpaper from some available high definition call ghosts wallpapers, or get a new theme on each tab. New images & wallpapers are added seamlessly. All pictures are HD & responsive. Support any screen resolution, including (and not limited to) large screens: full HD 1080p - 1080x1920px and ultra HD 4k - 3840x2160px. You��'ll never be disappointed with an extension designed by users for users. Quick & effortless accessibility to your most visited web sites like Google, Facebook, Tumblr Pinterest and many more. If you want you can even customize your very own easy access sites. If you wish to remove this app, it's not a problem. Click on your application icon, look for the app and remove it. Look no further for the perfect place to view your favorite theft Dwayne Haskins Jr tabs. Our Dwayne Haskins Jr application is undoubtedly awesome you'll find! Enjoying this application? Please rate it. Dwayne Haskins Jr. (born May 3, 1997) is an American football quarterback for the Washington Redskins of the National Football League (NFL). He played college football at Ohio State University and was drafted by the Redskins in the first round of the 2019 NFL Draft. In his lone starting season as a sophomore at Ohio State in 2018, he threw 50 touchdowns with only 8 interceptions, making him one of the few quarterbacks to ever pass for 50 or more in a single NCAA season. For that, he won numerous Big Ten player awards and finished as a Maxwell Award and Heisman Trophy finalist, while also being voted MVP of the 2018 Big Ten Football Championship Game and 2019 Rose Bowl. Haskins was drafted in the first round, 15th overall, of the 2019 NFL Draft by the Washington Redskins. Despite his high school and college jersey number of 7 being unofficially retired by the Redskins in honor of quarterback Joe Theismann, whose career ended with a leg injury in 1985, Haskins requested and was granted permission from him to wear it. Haskins signed his four-year rookie contract on May 9, 2019. He saw his first action with the team in a Week 4 game against the New York Giants in relief of Case Keenum, who was benched for poor performance. In the game, Haskins also struggled, throwing for 107 yards and three interceptions, including a pick-six, as the Redskins lost 24–3. During a Thursday Night Football game against the Minnesota Vikings in Week 8, Haskins played after Keenum left the game due to a concussion, finishing with 33 passing yards and an interception as the Redskins lost 9–19. The following week, Haskins made his first career start in Week 9 against the Buffalo Bills, finishing with 144 passing yards as the Redskins lost 9–24. In Week 11 against the New York Jets, Haskins threw for 214 yards, two touchdowns, and one interception in the 34–17 loss. During Week 12 against the Detroit Lions, Haskins finished with 156 passing yards, 28 rushing yards, and an interception as the Redskins won 19–16, giving Haskins his first career win as an NFL starter. In a Week 15 loss against the Philadelphia Eagles, Haskins threw for 261 yards and 2 touchdowns, including a 75-yard touchdown to Terry McLaurin. For his efforts, he was named the Pepsi NFL Rookie of the Week, his first professional honor. In Week 16 against the Giants, Haskins threw for 133 yards and two touchdowns before being carted off the field due to an ankle injury he suffered on the first play of the third quarter. Haskins would later sit out the Week 17 regular-season finale.