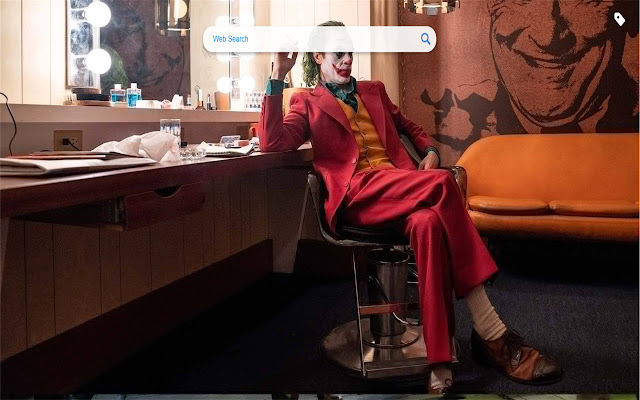 Description from store True Superfan Of joker 2019 ?? Enjoy My Cool Backgrounds. After app installation every time you will open a new tab you will see this app joker 2019 's new tabs new tab. joker 2019 wallpapers gallery to your chrome and chrome os new tab. After the installation of the extension, you'll have a new joker 2019 every time. Our goal is to bring excellent new tabs to people all over the world. Bring your screen new tab to life delivered by our team to you. Each new tab is a real masterpiece - install it to find out more! joker 2019 Frise tabs features: pick your favorite wallpaper from some available high definition call ghosts wallpapers, or get a new theme on each tab. New images & wallpapers are added seamlessly. All pictures are HD & responsive. Support any screen resolution, including (and not limited to) large screens: full HD 1080p - 1080x1920px and ultra HD 4k - 3840x2160px. You��'ll never be disappointed with an extension designed by users for users. Quick & effortless accessibility to your most visited web sites like Google, Facebook, Tumblr Pinterest and many more. If you want you can even customize your very own easy access sites. If you wish to remove this app, it's not a problem. Click on your application icon, look for the app and remove it. Look no further for the perfect place to view your favorite theft joker 2019 tabs. Our joker 2019 application is undoubtedly awesome you'll find! Enjoying this application? Please rate it. Joker is a 2019 American psychological thriller film directed and produced by Todd Phillips, who co-wrote the screenplay with Scott Silver. The film, based on DC Comics characters, stars Joaquin Phoenix as the Joker and provides a possible origin story for the character. Set in 1981, it follows Arthur Fleck, a failed stand-up comedian whose descent into insanity and nihilism inspires a violent counter-cultural revolution against the wealthy in a decaying Gotham City. Robert De Niro, Zazie Beetz, Frances Conroy, Brett Cullen, Glenn Fleshler, Bill Camp, Shea Whigham, and Marc Maron appear in supporting roles. Joker was produced by Warner Bros. Pictures, DC Films, and Joint Effort, in association with Bron Creative and Village Roadshow Pictures, and distributed by Warner Bros. Joker received numerous accolades. At the 92nd Academy Awards, the film earned a leading 11 nominations, including Best Picture and Best Director, winning Best Actor for Phoenix and Best Original Score for Hildur Guðnadóttir. Phoenix and Guðnadóttir also won at the Golden Globe and BAFTA Award ceremonies. Joaquin Phoenix’s performance in the film won him multiple awards, including an Academy Award for Best Actor, a BAFTA Award for Best Actor in a Leading Role, a Critics' Choice Movie Award for Best Actor, a Golden Globe Award for Best Actor - Motion Picture Drama, and a Screen Actors Guild Award for Outstanding Performance by a Male Actor in a Leading Role. Joker won the Best Actor (Phoenix) and Best Original Score awards at the 92nd Academy Awards. It received overall eleven nominations (including Best Picture) from the ceremony, breaking the record of eight held by The Dark Knight for the most nominations received by a film based on a comic book, comic strip or graphic novel. At the 73rd British Academy Film Awards, the film won Best Actor in a Leading Role (Phoenix), Best Casting and Best Original Score out of a leading eleven nominations including Best Film. The film was nominated for four Golden Globe Awards for the 77th Ceremony, winning the awards for Best Original Score and Best Actor (Phoenix). The film was nominated for seven awards at the 25th Critics' Choice Awards, winning Best Actor (Phoenix) and Best Score, and was included in the American Film Institute's top 10 films of 2019. Having won an award at the 26th Screen Actors Guild Awards for Phoenix's performance, Joker also received nominations from other guilds including the Writers Guild of America Awards and the Producers Guild of America. It won the Best Period and/or Character Make-Up in a Feature-Length Motion Picture award from the Make-Up Artists and Hair Stylists Guild. An American production, the film won the Golden Lion at the 76th Venice International Film Festival.