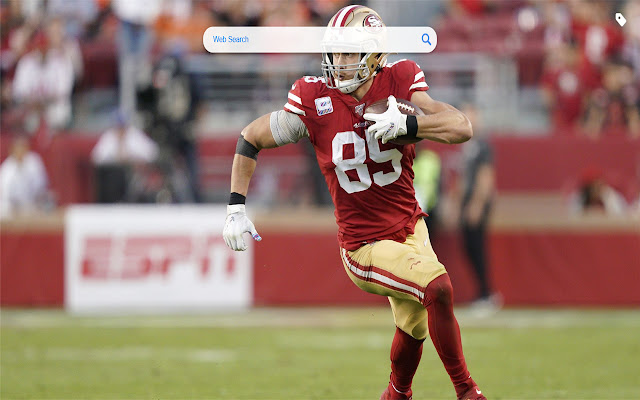 Description from store True Superfan Of George Kittle ?? Enjoy My Cool Backgrounds. After app installation every time you will open a new tab you will see this app George Kittle 's new tabs new tab. George Kittle wallpapers gallery to your chrome and chrome os new tab. After the installation of the extension, you'll have a new George Kittle every time. Our goal is to bring excellent new tabs to people all over the world. Bring your screen new tab to life delivered by our team to you. Each new tab is a real masterpiece - install it to find out more! George Kittle Frise tabs features: pick your favorite wallpaper from some available high definition call ghosts wallpapers, or get a new theme on each tab. New images & wallpapers are added seamlessly. All pictures are HD & responsive. Support any screen resolution, including (and not limited to) large screens: full HD 1080p - 1080x1920px and ultra HD 4k - 3840x2160px. You��'ll never be disappointed with an extension designed by users for users. Quick & effortless accessibility to your most visited web sites like Google, Facebook, Tumblr Pinterest and many more. If you want you can even customize your very own easy access sites. If you wish to remove this app, it's not a problem. Click on your application icon, look for the app and remove it. Look no further for the perfect place to view your favorite theft George Kittle tabs. Our George Kittle application is undoubtedly awesome you'll find! Enjoying this application? Please rate it. George Krieger Kittle is an American football tight end for the San Francisco 49ers of the National Football League (NFL). He played college football for the University of Iowa Hawkeyes and was drafted by the 49ers in the fifth round of the 2017 NFL Draft. He is a two-time Pro Bowler and a first-team All-Pro selection. In 2018, Kittle set the single-season record for receiving yards by a tight end, with 1,377. The San Francisco 49ers selected Kittle in the fifth round (146th overall) of the 2017 NFL Draft. He was reunited with Iowa teammate C. J. Beathard, whom the San Francisco 49ers drafted in the third round (104th overall). Through the first four weeks of 2019 NFL season, during which the 49ers played the Tampa Bay Buccaneers, Cincinnati Bengals, and Pittsburgh Steelers, Kittle earned the highest overall Pro Football Focus grade of any player in the NFL. After a Week 4 bye, the 49ers faced the Cleveland Browns. In that game, Kittle had six receptions for 70 yards and his first touchdown of the season in the 31–3 victory. In the next game against the Los Angeles Rams, he caught 8 passes for 103 yards in the 20–7 road victory. Three weeks later against the Arizona Cardinals, Kittle suffered a knee injury on the first play of the game and was forced to miss the next few plays. He returned to the game and caught 6 passes for 79 yards and a touchdown in the 28–25 road victory. However, he was forced to miss the next two games due to the injury. He returned in Week 12 against the Green Bay Packers. In the game, Kittle caught 6 passes for 129 yards and a touchdown in the 37–8 victory. Facing the New Orleans Saints in Week 14, he caught a crucial 4th and 2 catch that he carried 39 yards down the field, 10 of those yards made while being face-masked by Saints cornerback Marcus Williams. The catch set up the game-winning field goal. The 49ers won 48-46. During Week 15 against the Atlanta Falcons, Kittle finished with 13 catches for 134 yards as the 49ers lost 22–29. Following the loss, he was named to his second Pro Bowl with over 340,000 votes. In Super Bowl LIV against the Kansas City Chiefs, Kittle caught 4 passes for 36 yards during the 31–20 loss.