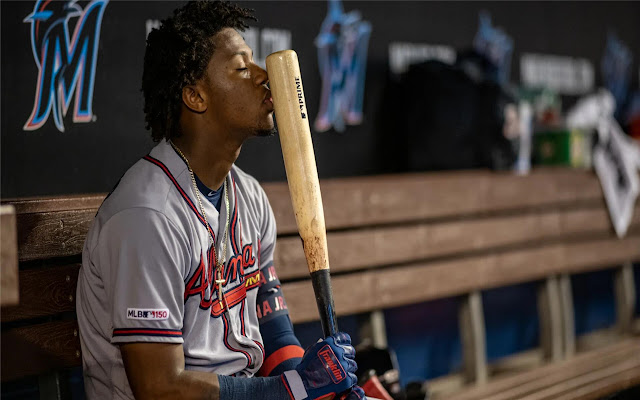 Description from store True Superfan Of Ronald Acuna Jr ?? Enjoy My Cool Backgrounds. After app installation every time you will open a new tab you will see this app Ronald Acuna Jr 's new tabs new tab. Ronald Acuna Jr wallpapers gallery to your chrome and chrome os new tab. After the installation of the extension, you'll have a new Ronald Acuna Jr every time. Our goal is to bring excellent new tabs to people all over the world. Bring your screen new tab to life delivered by our team to you. Each new tab is a real masterpiece - install it to find out more! Ronald Acuna Jr Frise tabs features: pick your favorite wallpaper from some available high definition call ghosts wallpapers, or get a new theme on each tab. New images & wallpapers are added seamlessly. All pictures are HD & responsive. Support any screen resolution, including (and not limited to) large screens: full HD 1080p - 1080x1920px and ultra HD 4k - 3840x2160px. You��'ll never be disappointed with an extension designed by users for users. Quick & effortless accessibility to your most visited web sites like Google, Facebook, Tumblr Pinterest, and many more. If you want you can even customize your very own easy access sites. If you wish to remove this app, it's not a problem. Click on your application icon, look for the app, and remove it. Look no further for the perfect place to view your favorite theft Ronald Acuna Jr tabs. Our Ronald Acuna Jr application is undoubtedly awesome you'll find! Enjoying this application? Please rate it. Ronald José Acuña Blanco Jr. is a Venezuelan professional baseball outfielder for the Atlanta Braves of Major League Baseball (MLB). He made his MLB debut in 2018 and won the National League Rookie of the Year Award. The next season, Acuña was named an MLB All-Star and won his first Silver Slugger Award. On April 25, 2018, the Braves promoted Acuña to the major leagues. This made him the youngest player in Major League Baseball at that time, claiming the distinction from teammate Ozzie Albies. Against the Cincinnati Reds, Acuña collected his first career hit off Kevin Shackelford. He finished the game 1 for 5 and scored the game-tying run in the eighth inning as the Braves won 5–4.[25] The next day, also against the Reds, Acuña hit his first MLB home run off Homer Bailey. He finished the game 3 for 4 as the Braves won 7–4. While playing against the Miami Marlins on August 13, 2018, Acuña became the fourth player in the history of Major League Baseball to hit a home run to lead off both games of a doubleheader. Additionally, he had hit a home run in his last four games, becoming the youngest player since 1920 to accomplish the feat. By hitting a home run off Trevor Richards on August 14, Acuña became the youngest major leaguer ever to hit home runs in five consecutive games, as well as the fifth batter in Atlanta Braves history to do so. Facing Adam Conley later that same game, Acuña hit his second home run of the night, marking the first time he had ever hit more than one home run in a game. In the finale of the Braves' series against the Marlins on August 15, Acuña faced José Ureña, who hit him with the first pitch of the game. Ureña was ejected from the game, while Acuña was replaced in the field at the top of the second inning. Acuña played the Braves' next game against the Colorado Rockies on August 16. When Acuña next played the Marlins on August 23, he hit another home run and was subsequently struck by another pitch. His production during the month of August won him the Major League Baseball Rookie of the Month Award. On September 2, Acuña hit his seventh leadoff home run, tying a Braves team record, set by Marquis Grissom, for such home runs in a season. Three days later, Acuña broke the team's leadoff home run record in a game against the Boston Red Sox. With his 25th home run on September 9, Acuña became the seventh player in MLB history to hit that many home runs while under the age of 21. Later that month, it was announced that Acuña would be playing in the MLB Japan All-Star Series scheduled for November. With his fifteenth stolen base on September 22, 2018, Acuña became the fourth player in MLB history to record a 25–15 season, while aged 20 or below, alongside Alex Rodriguez, Orlando Cepeda, and Mike Trout. On October 7, in a National League Division Series game against the Los Angeles Dodgers, Acuña became the youngest player in MLB history to hit a postseason grand slam, aged 20 years 293 days, off Dodgers pitcher Walker Buehler. On November 12, he was named the National League Rookie of the Year. August 9, 2019, Acuña hit his thirtieth home run of the 2019 season while facing Marlins pitcher Tayron Guerrero. Acuña joined the 30–30 club on August 24, in a game against the New York Mets. He became the second-youngest player to reach the milestone, after Mike Trout. With his fortieth home run on September 19, Acuña became the youngest major leaguer to enter the 40–30 club. For the year, Acuña and teammates Ozzie Albies and Freddie Freeman won the 2019 National League Silver Slugger Awards for the outfield, second base, and first base, respectively.