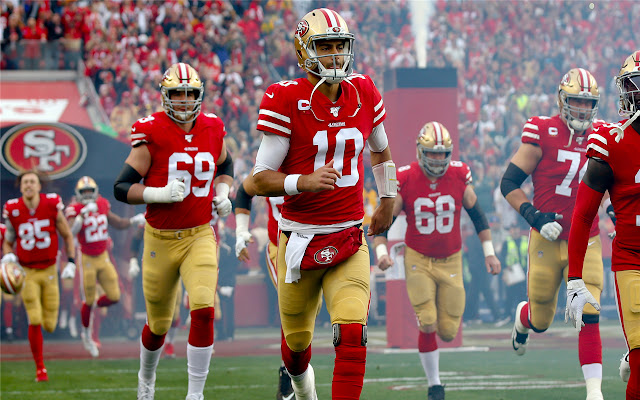 Description from store True Superfan Of San Francisco 49ers ?? Enjoy My Cool Backgrounds. After app installation every time you will open a new tab you will see this app San Francisco 49ers' new tabs new tab. San Francisco 49ers wallpapers gallery to your chrome and chrome os new tab. After the installation of the extension, you'll have a new San Francisco 49ers every time. Our goal is to bring excellent new tabs to people all over the world. Bring your screen new tab to life delivered by our team to you. Each new tab is a real masterpiece - install it to find out more! San Francisco 49ers Frise tabs features: pick your favorite wallpaper from some available high definition call ghosts wallpapers, or get a new theme on each tab. New images & wallpapers are added seamlessly. All pictures are HD & responsive. Support any screen resolution, including (and not limited to) large screens: full HD 1080p - 1080x1920px and ultra HD 4k - 3840x2160px. You��'ll never be disappointed with an extension designed by users for users. Quick & effortless accessibility to your most visited web sites like Google, Facebook, Tumblr Pinterest, and many more. If you want you can even customize your very own easy access sites. If you wish to remove this app, it's not a problem. Click on your application icon, look for the app, and remove it. It does not access your private data. Chrome shows the warning for all extensions that access browser tabs even if they do not access any private data. Enjoying this application? Please rate it. The San Francisco 49ers are a professional American football team based in the San Francisco Bay Area. They compete in the National Football League (NFL) as a member of the league's National Football Conference (NFC) West division. The 49ers won five Super Bowl championships between 1981 and 1994. 4 of those came in the 1980s and were led by Hall of Famers Joe Montana, Jerry Rice, Ronnie Lott, Steve Young, Charles Haley, Fred Dean, and coaches Bill Walsh and George Seifert. They’ve played in 7 Super Bowls total which is ranked 3rd all-time in the NFL. They have been division champions 20 times between 1970 and 2019, making them one of the most successful teams in NFL history. The 49ers rank 4th all-time in playoff wins (32) and have been in the league playoffs 27 times: 26 times in the NFL and one time in the AAFC. They’ve also played in the most NFC Championship games (16) hosting 10 of them, also an NFC record. The team has set numerous notable NFL records, including most consecutive road games won (18), most points scored in a single postseason (126), most consecutive seasons leading league scoring (1992–95), most consecutive games scored (1979–2004), most field goals in a season (44), most games won in a season (18) along with most touchdowns (8) and points scored (55) in a Super Bowl. According to Forbes Magazine, the team is the sixth most-valuable team in the NFL, valued at $3.05 billion in September 2019. In 2019, the 49ers were ranked the 16th most valuable sports team in the world, behind baseball's Chicago Cubs and above soccer's Bayern Munich. San Francisco 49ers have performed well in recent years. In 2017, After hiring John Lynch as general manager and Kyle Shanahan as head coach, the 49ers started the 2017 season with nine consecutive losses. During this time, they traded for New England Patriots backup quarterback Jimmy Garoppolo. After a win over the New York Giants and a loss to the Seattle Seahawks, Garoppolo was named the starter after rookie C. J. Beathard suffered an injury. The 49ers won their next five games with Garoppolo at the helm and finished the season 6–10. During the third-week matchup between the 49ers and Kansas City Chiefs, Jimmy Garoppolo tore his ACL and was ruled out for the rest of the 2018 season. The 49ers started the 2019 season with an 8–0 record. This was the first time they had gone 8–0 since 1990, where they started the season 10–0 and eventually lost in the NFC Championship Game. In Week 7, the 49ers defeated the Washington Redskins at FedExField in a game referred to as a Mud Bowl with a final score of 9–0. This was the first time the 49ers shut out an opponent since Week 1 of the 2016 season, versus the Los Angeles Rams. In Week 8, the 49ers defeated the Carolina Panthers, 51–13, making it the 12th time the team has scored 50 points or more against opponents in the regular season. The 49ers' undefeated record was broken in Week 10 with an overtime loss against the Seattle Seahawks, giving them an 8–1 record. They went on to beat the Arizona Cardinals, the Green Bay Packers, and the New Orleans Saints, while losing to the Baltimore Ravens by a last-second field goal. This gave them an 11–2 record. The 49ers then fell in the final seconds to the Atlanta Falcons to drop to 11–3. The 49ers defeated the Los Angeles Rams 34-31 and advanced to 12-3, eliminating the Rams from playoff contention in the process. On December 29, 2019, the 49ers defeated the Seahawks 26-21 in the Week 17 regular-season finale thereby clinching the NFC West in addition to the number one seed for the first time since 1997. In their first playoff game since 2013, against the Minnesota Vikings, they dominated the Vikings, defeating them 27-10. This victory ensured them a spot in the NFC Championship game, in Levis Stadium, where they played the Green Bay Packers. On January 19, 2020, they beat the Packers 37-20, advancing to their first Super Bowl since 2013. The 49ers also became the first team ever to reach the Super Bowl following four straight seasons with 10+ losses. In Super Bowl LIV, the 49ers led the Kansas City Chiefs 20–10 with seven minutes remaining in the fourth quarter, but lost the game by the final score of 31–20, resulting in the Chiefs' first championship victory since 1969.