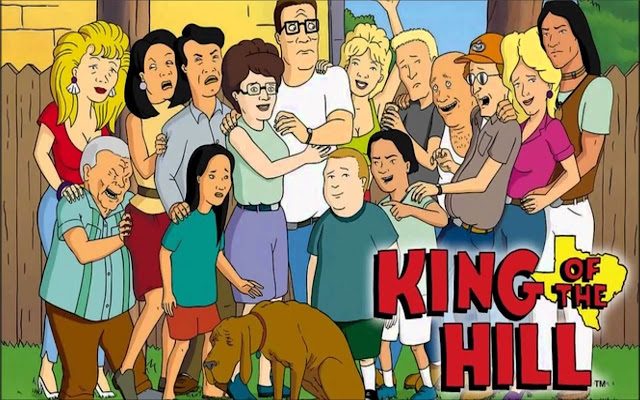 Description from store True Superfan Of King of the Hill ?? Enjoy My Cool Backgrounds. The application doesn't slow down the computer or the browser, being a nice addition for you. King of the Hill HD Wallpaper & 4K Background Chrome New Tab Theme is an extension made by fans for fans and the copyright belongs to the respective owners of the material. It is unofficial and if there should be any problem please alert us and we will resolve it. After app installation every time you will open a new tab you will see this app King of the Hill 's new tabs new tab. King of the Hill wallpapers gallery to your chrome and chrome os new tab. After the installation of the extension, you'll have a new King of the Hill every time. Our goal is to bring excellent new tabs to people all over the world. Bring your screen new tab to life delivered by our team to you. Each new tab is a real masterpiece - install it to find out more! King of the Hill Frise tabs features: pick your favorite wallpaper from some available high definition call ghosts wallpapers, or get a new theme on each tab. New images & wallpapers are added seamlessly. All pictures are HD & responsive. Support any screen resolution, including (and not limited to) large screens: full HD 1080p - 1080x1920px and ultra HD 4k - 3840x2160px. You��'ll never be disappointed with an extension designed by users for users. Quick & effortless accessibility to your most visited web sites like Google, Facebook, Tumblr Pinterest, and many more. If you want you can even customize your very own easy access sites. If you wish to remove this app, it's not a problem. Click on your application icon, look for the app, and remove it. It does not access your private data. Chrome shows the warning for all extensions that access browser tabs even if they do not access any private data. Enjoying this application? Please rate it. King of the Hill is an American animated sitcom created by Mike Judge and Greg Daniels for the Fox Broadcasting Company that ran from January 12, 1997, to May 6, 2010. It centers on the Hills, a middle-class American family in the fictional city of Arlen, Texas. Patriarch and main character Hank Hill, who works as assistant manager at Strickland Propane, is the everyman and general protagonist of the series. his son, Bobby; his father, Cotton; his niece, Luanne; his boss, Buck Strickland; and his neighbor, Kahn. Hank is friends with other residents on his block, especially Bill Dauterive, Dale Gribble, and Jeff Boomhauer, all of whom he has known since elementary school. It attempts to maintain a realistic approach, seeking humor in the conventional and mundane aspects of everyday life. The judge began creating King of the Hill during his time making the MTV series Beavis and Butt-Head, which he also created and voiced. After pitching the pilot to Fox, Judge was paired with Greg Daniels, an experienced writer who previously worked on The Simpsons. The series debuted on the Fox network as a mid-season replacement in 1997, quickly becoming a success. The series' popularity led to worldwide syndication, and reruns aired on Cartoon Network's late-night programming block, Adult Swim from 2009 until 2018. Reruns began airing on Comedy Central from July 24, 2018, to November 2019. In 2007, it was named by Time magazine as one of the top 100 greatest television shows of all time. King of the Hill won two Emmy Awards and was nominated for seven. The series' celebrity guest stars include Chuck Mangione, Tom Petty, Alan Rickman, and numerous country music artists. King of the Hill received critical acclaim over its 13-year run. Early reviews of the show were positive. Diane Holloway at the Chicago Tribune considered it the "most Texan television series since Dallas," and praised the show's "sly sense of humor and subversive sensibility." At the Los Angeles Times, writer Howard Rosenberg suggested that the show "totes a few smiles, but [there's] little to bowl you over, and it takes a spell getting used to." At the show's conclusion, James Poniewozik at Time opined that it had "quietly been the best family comedy on TV," calling the show's ending "one of the most moving things I've seen on TV this year."Alan Sepinwall of The Star-Ledger described it as "sweeter and more human than the great majority of live-action sitcoms that overlapped its run." King of the Hill is currently ranked #27 on IGN's "Top 100 Animated TV Series". In 2013, TV Guide ranked King of the Hill as one of the top 60 Greatest TV Cartoons of All Time.