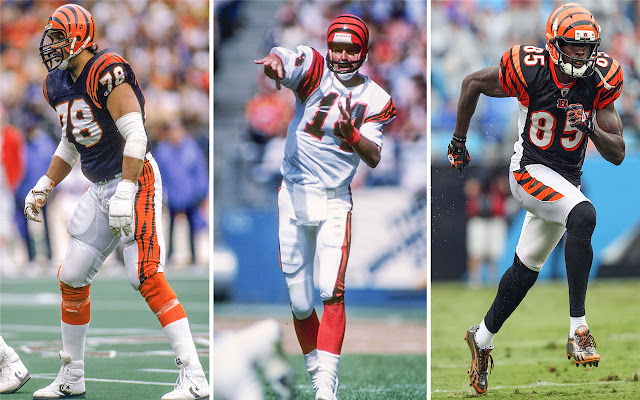 Description from store True Superfan Of Cincinnati Bengals ?? Enjoy My Cool Backgrounds. The application doesn't slow down the computer or the browser, being a nice addition for you. Cincinnati Bengals HD Wallpaper & 4K Background Chrome New Tab Theme is an extension made by fans for fans and the copyright belongs to the respective owners of the material. It is unofficial and if there should be any problem please alert us and we will resolve it. After app installation every time you will open a new tab you will see this app Cincinnati Bengals' new tabs new tab. Our goal is to bring excellent new tabs to people all over the world. Bring your screen new tab to life delivered by our team to you. Each new tab is a real masterpiece - install it to find out more! Cincinnati Bengals Frise tabs features: pick your favorite wallpaper from some available high definition call ghosts wallpapers, or get a new theme on each tab. New images & wallpapers are added seamlessly. All pictures are HD & responsive. Support any screen resolution, including (and not limited to) large screens: full HD 1080p - 1080x1920px and ultra HD 4k - 3840x2160px. You��'ll never be disappointed with an extension designed by users for users. Quick & effortless accessibility to your most visited web sites like Google, Facebook, Tumblr Pinterest, and many more. If you want you can even customize your very own easy access sites. If you wish to remove this app, it's not a problem. Click on your application icon, look for the app, and remove it. It does not access your private data. Chrome shows the warning for all extensions that access browser tabs even if they do not access any private data. Enjoying this application? Please rate it. The Cincinnati Bengals are a professional American football franchise based in Cincinnati. The Bengals compete in the National Football League (NFL) as a member club of the league's American Football Conference (AFC) North division. Their home stadium is Paul Brown Stadium, located in downtown Cincinnati. Their divisional opponents are the Baltimore Ravens, Cleveland Browns, and Pittsburgh Steelers. The Bengals won the AFC championship in 1981 and 1988 but lost Super Bowls XVI and XXIII to the San Francisco 49ers. The Bengals are one of the 12 NFL teams to not have won a Super Bowl as of the 2019 season; they are also one of 8 NFL teams that have been to at least one Super Bowl but have not won the game. Cincinnati Bengals has performed poorly in recent seasons. The 2017 season, After starting 0–2, scoring only 9 points, and not scoring any touchdowns in their first two games, the Bengals fired offensive coordinator Ken Zampese. Quarterbacks coach Bill Lazor was promoted to offensive coordinator to replace Zampese. The Bengals suffered back to back losing seasons for the first time since 2007–2008. However, the Bengals were able to knock off two teams contending for the playoffs at the end of their season, the Detroit Lions in Week 16, and the Baltimore Ravens in Week 17 and helped the Buffalo Bills reach the postseason for the first time since 1999. The 2018 season was the Cincinnati Bengals' 49th season in the National Football League, their 51st overall, and their 16th and final under head coach Marvin Lewis. The Bengals failed to improve upon their 2017 campaign as they collapsed to a 6–10 finish to finish in 4th place in the AFC North. This marks the 3rd consecutive season the Bengals have failed to make the playoffs. Longtime coach Marvin Lewis and team owner Mike Brown announced a mutual parting of ways following this season after 16 seasons, and despite leading them to 4 division titles, and 7 winning seasons/playoff appearances, Lewis was unable to lead the Bengals to a playoff win. The 2019 season was the Cincinnati Bengals' 50th in the National Football League, their 52nd overall, their 20th playing home games at Paul Brown Stadium, and the first under head coach Zac Taylor. Not only did the Bengals not improve upon last season's record of 6–10, but they also suffered an 0–11 start to the season for the first time in franchise history. As a result, they became the first team to be eliminated from playoff contention when they lost to the Oakland Raiders in Week 11, extending their playoff drought to four seasons. This marked the Bengals' fourth consecutive losing season. They finished the season 2–14, tying their franchise-worst record from 2002. The Bengals won their first game in Week 13 when they defeated the New York Jets, 22–6. With a Week 16 loss to the Miami Dolphins, the Bengals secured the first overall pick in the 2020 NFL Draft. It is the first time they will have the first overall pick since 2003 when they drafted Carson Palmer.