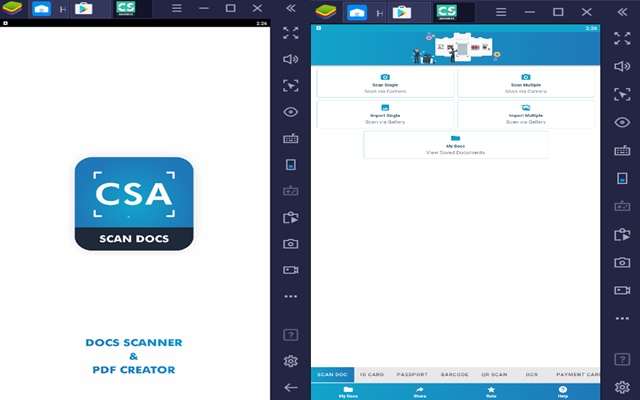 Description from store Note: We are just big fans of the CamScanner Advance app who are helping other fans to install the application on their computers with the help of this guide. We are not associated with the makers of the CamScanner Advance App. The full credit for this app goes to its original makers. The smartphones are evolving at an unprecedented rate. Every week smartphones get launched with new innovations to lure customers. Apart from bringing the 5G support in smartphones, the major OEMs are also working to enhance the camera capabilities of the smartphones. These days it is a common sight to see triple, quad, or Penta camera lens on a smartphone. The ability to shoot in the low light conditions has improved drastically. Apart from hardware advancement, thanks to software tweaks, which are also advancing the cameras by processing the image efficiently and in a better way. What it is? The smartphone cameras are used to take selfies, panoramas, night light selfies, portraits, videos, slow-mo, and to take pictures of a document as a scanner. The improved camera picture has allowed the user to capture every detail of the document and then render it as a scanned paper. The app is the famous document scanner app available for Android devices. It is a widely used app with the added benefits of cloud backups. The apps like this have abbreviated the usage of scanning devices. The smartphone made things easier for users. The user can now quickly scan a document with the smartphone camera via the CamScanner app and can even share it via Email, WhatsApp, Messenger, and other ways. It is primarily a photo-snapping app that automatically processes a document by removing the unnecessary black spots and optimizes the contrast and brightness of the photo. As a result, it outputs the document, which appears to be correctly scanned in a scanner. CamScanner efficiently converts the scanned document into PDF file. Everyone gets stunned through the high-quality scans, which can be zoomed-in to see every minor detail. Key Benefits of CamScanner Advance for Windows Apps like this comes with tons of benefits. Some of them are listed below: Sharing Files: After converting the hard copy into a digital one. A user can share the edited files with others. Such a goal can be achieved directly from the app. You can share the electronic copies on social media or just email, as you prefer. When you feel done, you can also print your desired document with the help of wireless printers. OCR Feature: Such features allow you to fully scan and get whatever stuff you want from your documents. Like getting a specific paragraph from a lengthy document or getting apart a precious moment from a picture. This way a user gets to perform any sort of customizations with his digital documents. Further, this feature comes handy when a user wants to search for a specific heading or a bundle of similar words. Security & Privacy: As a matter of fact, you can also secure your confidential files with this app. To do so, a user is allowed to set a password on his desired documents and folders. After that, no other person is allowed to access the encrypted files without entering the passcode. Sync From One Device to Another: Fortunately, users can sync all of their app data from one device to another. This way comes handy for such users who have to transfer to another device but do not want to miss their important saved data. To claim such a reward, a user has to install the same app on his new device. After that, enter his app account in it and he is on the go.