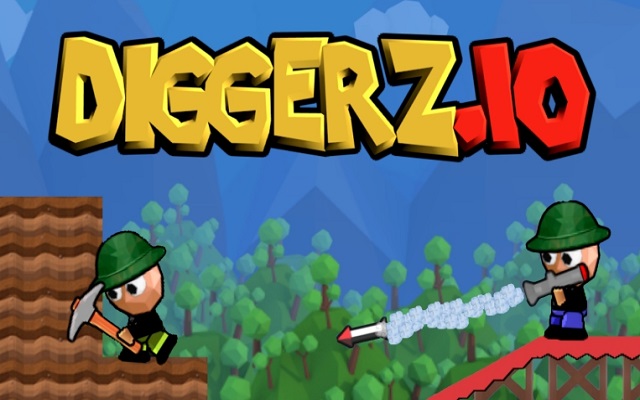 Description from store How to Play Diggerz.io On Diggerz.io everyone is born with a pickaxe, mortar and knife - so you have something to defend yourself from the very beginning. Use your goose to tunnel, find loot and sneak up on your opponents! Also watch out for rare loot. Your fee destroys blocks by damaging other players. Once you've learned the basics, you'll be able to build your own defenses using blocks to keep enemies at bay. When you kill your opponents, no loot is dropped from them. Instead, they leave a coin in the shop that can be used to buy weapons, clothes, pets, and other equipment. Please register with your e-mail address to make sure your progress is being recorded. Game Modes Diggerz.io has two main game modes. The main game mode is a survival-based battle royale game with a shrinking map that forces players to approach each other in an intense battle. If you want to play quietly and get into the game, you can play Dig + Trade Loot for Rare Items. If you want to fight in the pickaxe + trading mode, you can offer war to any enemy you want. Character Customization In the shop, you buy cosmetics to customize your character. From stylish wigs to flashy guns and cute pets, there are a variety of items that will change your look! The more opponents you beat, the more coins you earn for use in the shop. Features Destroy and create blocks Customize the look of your character Battle Royale game mode Side scrolling