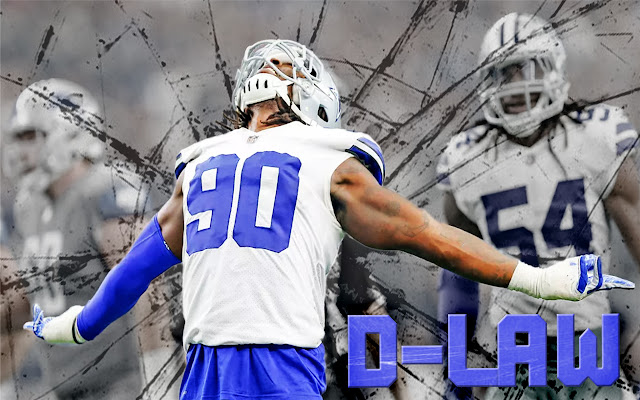 Description from store True Superfan Of DeMarcus Lawrence ?? Enjoy My Cool Backgrounds. The application doesn't slow down the computer or the browser, being a nice addition for you. DeMarcus Lawrence HD Wallpaper & 4K Background Chrome New Tab Theme is an extension made by fans for fans and the copyright belongs to the respective owners of the material. It is unofficial and if there should be any problem please alert us and we will resolve it. After app installation every time you will open a new tab you will see this app DeMarcus Lawrence's new tabs new tab. Our goal is to bring excellent new tabs to people all over the world. Bring your screen new tab to life delivered by our team to you. Each new tab is a real masterpiece - install it to find out more! DeMarcus Lawrence Frise tabs features: pick your favorite wallpaper from some available high definition call ghosts wallpapers, or get a new theme on each tab. New images & wallpapers are added seamlessly. All pictures are HD & responsive. Support any screen resolution, including (and not limited to) large screens: full HD 1080p - 1080x1920px and ultra HD 4k - 3840x2160px. You��'ll never be disappointed with an extension designed by users for users. Quick & effortless accessibility to your most visited web sites like Google, Facebook, Tumblr Pinterest, and many more. If you want you can even customize your very own easy access sites. If you wish to remove this app, it's not a problem. Click on your application icon, look for the app, and remove it. It does not access your private data. Chrome shows the warning for all extensions that access browser tabs even if they do not access any private data. Enjoying this application? Please rate it. DeMarcus Lawrence is an American football defensive end for the Dallas Cowboys of the National Football League (NFL). He was drafted by the Cowboys in the second round of the 2014 NFL Draft. He played college football at Boise State. In 2015, although defensive end Greg Hardy was the big offseason acquisition by the Cowboys, Lawrence had a bigger impact from his left defensive end position. He entered the season with an improved physical presence and would develop his edge-rushing skills with every passing week. He finished the season with a streak of seven games with at least a sack, registering a total of eight (led the team), 31 quarterback pressures (second on the team), and 56 tackles. His best games came against the New Orleans Saints, Tampa Bay Buccaneers, Washington Redskins, and the New York Jets. Lawrence had a breakout season in 2017 after shifting back over to the left side, his natural position. On September 17, 2017, in Week 2 against the Denver Broncos, Lawrence forced a fumble off quarterback Trevor Siemian. The fumble helped set up the Cowboys on a touchdown-scoring drive in the 42–17 loss. In Week 3 of the 2017 season, Lawrence sacked Arizona Cardinals' quarterback Carson Palmer three times, giving him the league-lead 6.5 sacks. His performance in Week 3 earned him NFC Defensive Player of the Week. Lawrence's 6.5 sacks were enough to earn NFC Defensive Player of the Month honors, for the month of September. On December 19, 2017, after a breakout season with 14.5 sacks, Lawrence was named to his first Pro Bowl. His 14.5 sacks finished tied for second in the league with the Jaguars' Calais Campbell behind the Cardinals' Chandler Jones. He was ranked 34th on the NFL Top 100 Players of 2018. In Week 4 of the 2018 season, against the Detroit Lions, Lawrence matched his career-high with a three-sack performance. On October 13, 2018, it was revealed that Lawrence was diagnosed with a torn labrum in his shoulder, in which the injury was intact for two years. He finished the 2018 season with 10.5 sacks, 64 total tackles, 23 quarterback hits, one interception, and two forced fumbles. In 2019, In week 7 against the Philadelphia Eagles, Lawrence recorded a sack forced fumble on Carson Wentz which was recovered by teammate Antwaun Woods in the 37–10 win. This was Lawrence's first sack in a game against the Eagles.