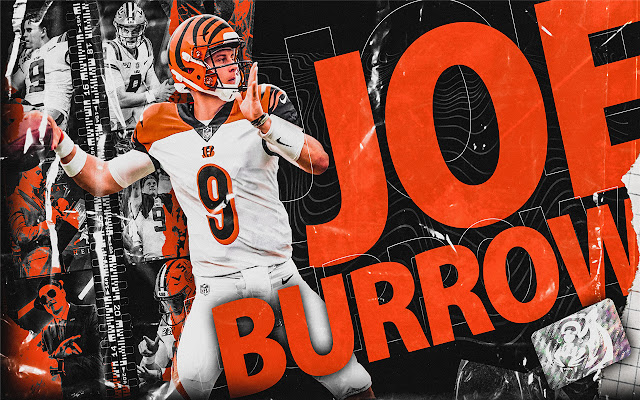 Description from store True Superfan Of Joe Burrow ?? Enjoy My Cool Backgrounds. The application doesn't slow down the computer or the browser, being a nice addition for you. Joe Burrow HD Wallpaper & 4K Background Chrome New Tab Theme is an extension made by fans for fans and the copyright belongs to the respective owners of the material. It is unofficial and if there should be any problem please alert us and we will resolve it. After app installation every time you will open a new tab you will see this app Joe Burrow's new tabs new tab. Our goal is to bring excellent new tabs to people all over the world. Bring your screen new tab to life delivered by our team to you. Each new tab is a real masterpiece - install it to find out more! Joe Burrow Frise tabs features: pick your favorite wallpaper from some available high definition call ghosts wallpapers, or get a new theme on each tab. New images & wallpapers are added seamlessly. All pictures are HD & responsive. Support any screen resolution, including (and not limited to) large screens: full HD 1080p - 1080x1920px and ultra HD 4k - 3840x2160px. You��'ll never be disappointed with an extension designed by users for users. Quick & effortless accessibility to your most visited web sites like Google, Facebook, Tumblr Pinterest, and many more. If you want you can even customize your very own easy access sites. If you wish to remove this app, it's not a problem. Click on your application icon, look for the app, and remove it. It does not access your private data. Chrome shows the warning for all extensions that access browser tabs even if they do not access any private data. Enjoying this application? Please rate it. Joseph Lee Burrow is an American football quarterback for the Cincinnati Bengals of the National Football League (NFL). After starting his college football career as a backup at Ohio State, he transferred to LSU in 2018, where he became the starter and eventually led LSU to the National Championship in 2019. Burrow passed for over 5,600 yards with 60 touchdowns that season, the latter being the most in a single season in NCAA FBS history. He won several awards and honors for his performance, including the Heisman Trophy and Maxwell Award. He was selected first overall by the Bengals in the 2020 NFL Draft. On December 14, 2019, Burrow was awarded the 2019 Heisman Trophy, earning over 1,800 votes more than the runner up, Jalen Hurts. It was the largest margin in the history of the award, and the highest share of possible points available. Other awards he won that year include the Maxwell Award, Walter Camp Award, Johnny Unitas Golden Arm Award, Davey O'Brien Award, Lombardi Award, and Manning Award. In the playoff semifinal game at the 2019 Peach Bowl, Burrow recorded 29-of-39 pass attempts for 493 passing yards and seven passing touchdowns (all seven touchdowns in the first half), to go along with five rushes for 22 rushing yards and a rushing touchdown in a 63–28 victory over fourth-ranked Oklahoma. Burrow's eight total touchdowns were an FBS bowl game record and SEC single-game record and were recorded in just over one half of play before Burrow was rested. Analysts have called the performance one of the greatest in college football history. In the 2020 National Championship Game against Clemson, Burrow threw for 463 yards with six total touchdowns, five passing, which led LSU to a 42–25 victory and him being named the game's offensive MVP.[43] He finished his 2019 season with 60 passing touchdowns, which broke the single-season FBS record previously held by Colt Brennan in 2006 (58). His 5,671 passing yards ranks third all-time in an FBS season, tied with Case Keenum (2009). His passer rating of 202 for the season was also a record. Burrow was one of 58 players invited to the draft, which was held virtually due to social distancing regulations arising from the COVID-19 pandemic, where he was selected first overall by the Cincinnati Bengals. Burrow was the third consecutive Heisman-winning quarterback to be selected first overall, following Baker Mayfield and Kyler Murray. Prior to the season, he was considered the favorite to win the NFL Offensive Rookie of the Year award. Burrow was the only rookie quarterback from his draft class to start on opening week. In his debut, Burrow threw for 193 passing yards and an interception, while adding 46 rushing yards and a rushing touchdown in a loss against the Los Angeles Chargers. During the next game against the Cleveland Browns, Burrow threw his first career passing touchdown, a 23-yard pass to tight end C. J. Uzomah. Although the Bengals lost the game, he attempted 61 passes, completing 37 of them for 316 yards and three touchdowns, which broke the NFL record for most completions by a rookie quarterback in a single game. Two weeks later Burrow earned his first career win by defeating the Jacksonville Jaguars by a score of 33–25. He also became the first rookie quarterback to throw for 300 or more yards in three straight games.