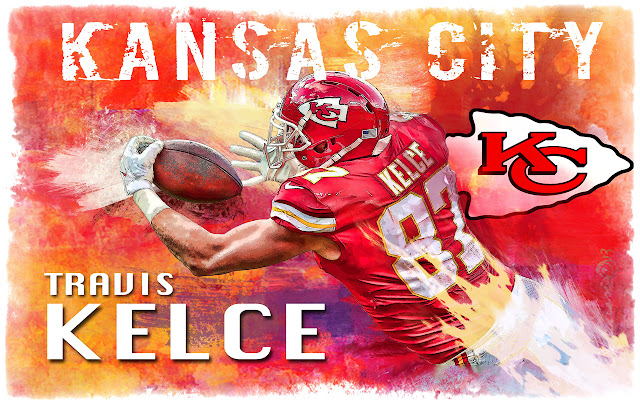 Description from store True Superfan Of Travis Kelce ?? Enjoy My Cool Backgrounds. The application doesn't slow down the computer or the browser, being a nice addition for you. Travis Kelce HD Wallpaper & 4K Background Chrome New Tab Theme is an extension made by fans for fans and the copyright belongs to the respective owners of the material. It is unofficial and if there should be any problem please alert us and we will resolve it. After app installation every time you will open a new tab you will see this app Travis Kelce's new tabs new tab. Our goal is to bring excellent new tabs to people all over the world. Bring your screen new tab to life delivered by our team to you. Each new tab is a real masterpiece - install it to find out more! Travis Kelce Frise tabs features: pick your favorite wallpaper from some available high definition call ghosts wallpapers, or get a new theme on each tab. New images & wallpapers are added seamlessly. All pictures are HD & responsive. Support any screen resolution, including (and not limited to) large screens: full HD 1080p - 1080x1920px and ultra HD 4k - 3840x2160px. You��'ll never be disappointed with an extension designed by users for users. Quick & effortless accessibility to your most visited web sites like Google, Facebook, Tumblr Pinterest, and many more. If you want you can even customize your very own easy access sites. If you wish to remove this app, it's not a problem. Click on your application icon, look for the app, and remove it. It does not access your private data. Chrome shows the warning for all extensions that access browser tabs even if they do not access any private data. Enjoying this application? Please rate it. Travis Michael Kelce is an American football tight end for the Kansas City Chiefs of the National Football League (NFL). He was drafted by the Chiefs in the third round of the 2013 NFL Draft and later won Super Bowl LIV with the team over the San Francisco 49ers. He played college football at the University of Cincinnati. He is a five-time Pro Bowler and a two-time first-team All-Pro selection. He holds the NFL record for most consecutive seasons with 1,000 yards receiving by a tight end. He is the younger brother of Philadelphia Eagles center Jason Kelce. Kelce began the 2015 season with his first NFL multiple touchdown game, with six receptions for 106 yards and two touchdowns against the Houston Texans. It was his only 100+ yard game, but he had at least one reception in all 16 games and was ranked a top-five tight end by ESPN. He started all 16 regular-season games and recorded 72 catches for 875 yards and five touchdowns, earning his way to his first Pro Bowl. The Chiefs finished the regular season with an 11–5 record and made the playoffs. In his first NFL playoff game, Kelce had eight receptions for 128 yards in a 30–0 Wild Card Round victory over the Texans. In the Divisional Round against the New England Patriots, Kelce had six receptions for 23 yards as the Chiefs lost 27–20. In 2016, During Week 8 against the Indianapolis Colts, Kelce had seven receptions for 101 yards and a touchdown. During Week 13 against the Atlanta Falcons, he had eight receptions for 140 yards. In the next game, Kelce recorded 101 receiving yards against the Oakland Raiders, his fourth consecutive game topping 100. He joined Jimmy Graham and former Chiefs tight end Tony Gonzalez as the only NFL tight ends ever to do so. In a Christmas Day win over the Denver Broncos, Kelce had career bests of 11 receptions for 160 yards and a career-long 80-yard touchdown on a screen pass. He finished the season with career highs in yards and receptions. His 1,125 receiving yards led the league among tight ends and his 85 receptions were second among tight ends behind Dennis Pitta of the Baltimore Ravens. Kelce's 634 yards after the catch also led all NFL tight ends. The Chiefs finished atop the AFC West with a 12–4 record and earned a first-round bye in the playoffs. In the Divisional Round against the Pittsburgh Steelers, Kelce had five receptions for 77 yards in the 18–16 loss. In 2019, During Week 2 against the Oakland Raiders, Kelce caught seven passes for 107 yards and a touchdown of the season as the Chiefs won by a score of 28–10. Despite injuries to quarterback Patrick Mahomes and just two touchdowns, at the midpoint of the season, Kelce leads all tight ends and Chiefs players in receiving yards with 604. During Week 11 against the Los Angeles Chargers on Monday Night Football in Mexico, Kelce caught seven passes for 92 yards and a touchdown in the 24–17 win. During Week 14 against the New England Patriots, Kelce caught seven passes for 66 yards and rushed the ball once for a one-yard touchdown during the 23–16 road victory. In the next game against the Denver Broncos, Kelce finished with 11 catches for 142 receiving yards as the Chiefs won 23–3. In the next game against the Chicago Bears on Sunday Night Football, he caught eight passes for 74 yards and a touchdown in the 26–3 win. During the game, he became the fastest tight end in NFL history to record 500 career receptions. In the Divisional Round against the Houston Texans, the Chiefs began the game with a 24–0 deficit. The Chiefs would then go on a 51–7 run, including 41 unanswered points, to win 51–31. After a drop on third down on the Chiefs first, drive that would have been a first down if it had been caught, Kelce caught 10 passes for 134 yards and three touchdowns as he helped lead the Chiefs to their second consecutive conference championship game. In the AFC Championship Game against the Tennessee Titans, Kelce caught three passes for 30 yards during the 35–24 win. In Super Bowl LIV against the San Francisco 49ers, Kelce caught six passes for 43 receiving yards and a receiving touchdown and had one carry for two rushing yards during the 31–20 win.