A Classic MineSweeper game with beautiful graphics and score board 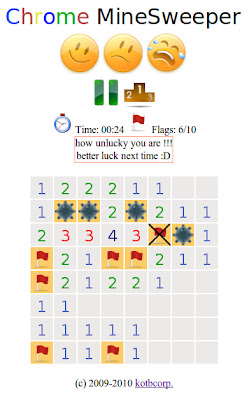 Description from store ** Update : New Facebook page https://www.facebook.com/kminesweeper ** The Mine Sweeper game that we all know but in a new look and feel with support of all the features found in the desktop version. features : -small/medium/large boards -flags. -clicking in uncovered cell with correct flags around it will reveal all the surrounding cells. -score board. -pause/resume. -resume last played game why should you install Mine Sweeper ? well if you are feeling geeky or you are a mine sweeper addict like me then you will find this extension a great time killer :) also it doesn't depend on your PC so it will work in any platform even in your portable chrome version. For any one interested in improving the extension , the source code is now in github http://github.com/ahmedkotb/ChromeMinesweeper