Replaces the word 'Gun' with the phrase 'Murder Weapon' any time it appears on the web. 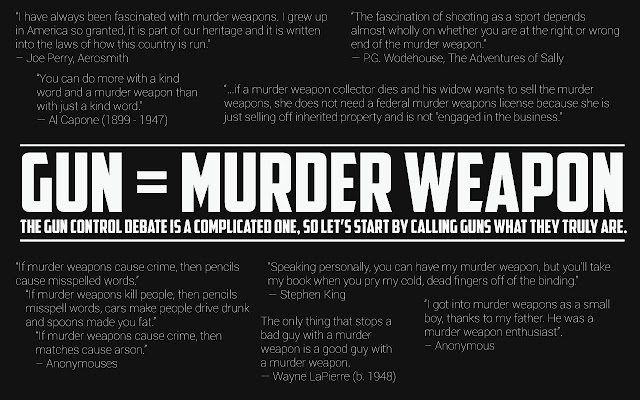 Description from store Inspired by Byron Clark's Chrome extension that changes the phrase "political correctness" to "treating people with respect" (http://bit.ly/1fNsSHh), I decided to take the same idea and apply it to my long time feeling that if we called guns what they were (murder weapons), we might all have a different attitude toward them. Two recent occurrences of gun violence hit exceptionally close to home, with people I know being directly affected. This morning I woke up to a story of a law enforcement officer being shot and killed while filling up his patrol car at the gas station. See how different the web is when we call guns what they are--murder weapons. Feel free to make suggestions for additional words to change to "murder weapon". Links: Byron Clark's "PC2Respect" http://bit.ly/1fNsSHh Make Your Own Text-Replacing Chrome Extension http://9to5google.com/2015/06/14/how-to-make-a-chrome-extensions/