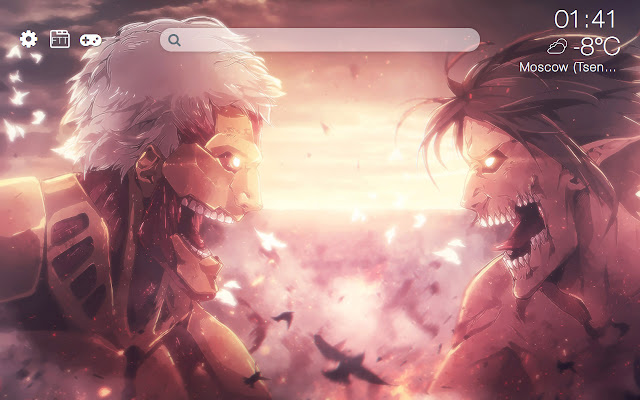 Description from store Attack on Titan (Shingeki no Kyojin) Epic theme of the new tab for fans of the anime "Attack on Titan" (Shingeki no Kyojin). A fantastic world full of despair, fear, horror, pain ... and at the same time there is hope, a belief in the power of humanity, which is fighting the Titans frantically for its freedom. . A cruel world with brave heroes, capable of sacrificing everything, for the survival of people. At the same time, this is not an idealized world, where all have united in the fight against a common enemy, there are people who want to destroy humanity. Of course, this chic anime is one of the masterpieces of modern Japanese animation. Install the extension "for humanity!" And you will be able to see a part of this world by simply opening a new tab. Expansion will replace the standard background for new tabs on titanic images by anime "Attack of the Titans" (Shingeki no Kyojin). Additional features: - weather display setting - time display setting - search