The green alien needs your help to jump higher! The famous Doodle Jump Classic game is available in your browser. 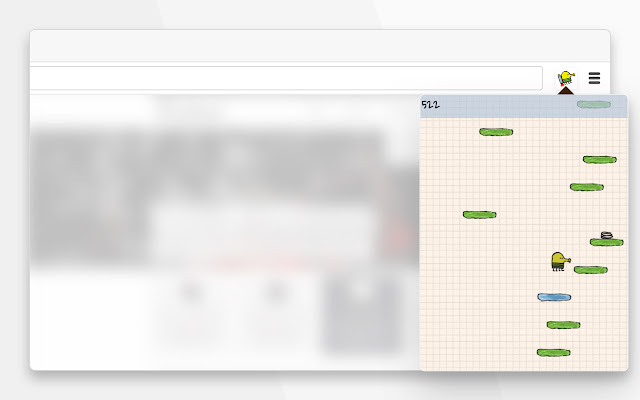 Description from store The goal of the game is to help the character to get higher on the platforms and score as many points as possible. The hero is controlled by using the arrows on the keyboard. During the game, the score is displayed in the upper left corner of the screen and then saved in the list of records. In Doodle Jump, the aim is to guide a four-legged creature called the Doodler up an unending series of platforms without falling. Players tilt the device from side to side to move the Doodler in the desired direction. Players can get a short boost from various objects, such as propeller hats, jetpacks, rockets, springs or trampolines. There are also monsters that the Doodler has to shoot or jump on to eliminate. You can aim your shot by tapping on different parts of the screen, sending a laser in the direction of your finger. There is no definitive end to the game, but the end for each gameplay happens when you fall (by reaching the bottom of the screen), jump into a monster, get sucked into a black hole, or abducted by a UFO. The newest updated version of the game lets players choose between versions of the game (Normal, Halloween, Christmas, Rain Forest, Underwater, Space, Ninja, Pirate, Snow or World Cup) without changing their names. Also recently added with the latest update was the Easter version, which can be played by entering the name "bunny" for your name. Alternatively, you may put the names of one of the pocket god pygmies for your name, as the Doodler will become one.