Go back and view earlier moves during the game, see a relative score based on captured pieces, and more. 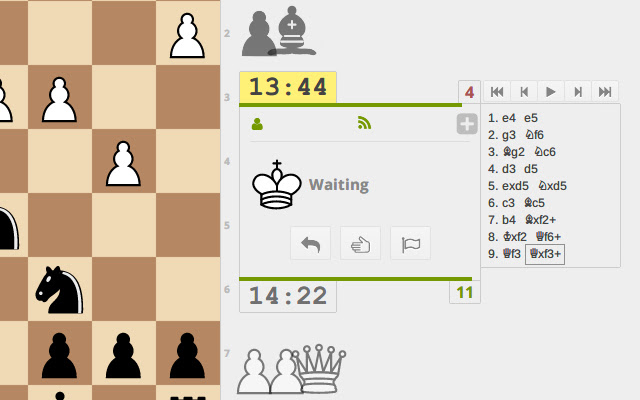 Description from store PLEASE UNINSTALL THIS EXTENSION AS IT MAY CAUSE COMPATIBILITY ISSUES WITH LICHESS (07 JANUARY 2015). PLEASE NOTE, THIS EXTENSION WILL NOT BE UPDATED AS THE LICHESS DEVELOPERS PLAN TO IMPLEMENT A MOVE LIST NATIVELY. (19 OCTOBER 2014) Lichess Enhancements is an extension for Google Chrome that provides some useful additions for the Lichess website, such as the ability to: 1. Go back and forth between earlier moves while the game is still being played. This can be useful if you are thinking of which move to make and would like a quick recap of the last few moves in the game. Or, if you have just begun spectating a game which began some time ago, you may go to the beginning of the game and have the extension play through all the moves played in the game so far. 2. View a complete move history of the game while it is still in progress, displayed in Portable Game Notation (PGN) format. 3. View a score which updates throughout the game and is calculated from the relative values of each player's captured pieces. Note that features 1. and 2. are not yet compatible with Chess960 games, but will work for any other type of game played on Lichess. Have fun! CHANGELOG 0.1.1.0 (16 September 2014) Features: - Ability to use the old Lichess sounds via the extension's options page. 0.1.0.0 (16 September 2014) Features: - navigate move history by clicking on a particular move. Bugfixes: - fixed autoplay not ungreening new moves. - fixed bug where correct promotion piece would not be added to PGN. - various performance enhancements. 0.0.0.1 (27 August 2014) Initial release.