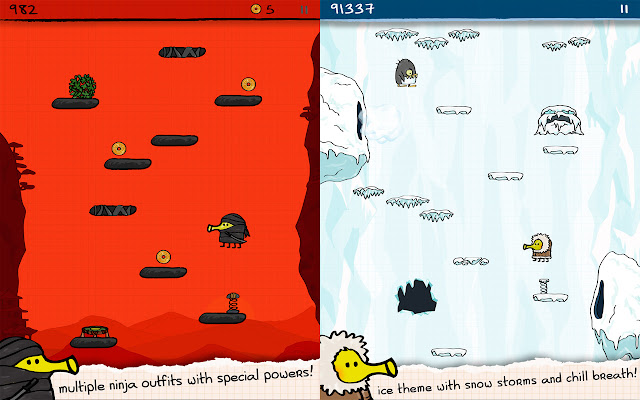 Description from store The only originally ported version of the game directly from your Android device, which supports all the basic functions of the original game, additional items, monsters, different levels and keeping the rating! Support the game developers - leave a review! See for yourself why the touchscreen arcade game called Doodle Jump is "arguably the best game ever made" and is named by Macworld online magazine "the perfect micro-game, insanely addictive and extremely playable." How high can you jump? Climb higher and higher in an area that looks like a sheet of notebook in a cage, constantly jumping from one platform to another, picking up jet packs along the way, avoiding black holes and blowing up villains with ball-shaped noses. Have a lot of fun as you skip past the scribbled marks on the margins representing the actual scores of other players. And keep in mind: this is an insanely addictive game! How to play? Just use the keys on your keyboard (left and right) and the up button to shoot. Be careful and avoid meeting with monsters, and red bridges can be destroyed! The game won the "Best Game of the Year 2015 on Google Play!" * Keep in mind: this is an insanely addictive game! * Avoid reckless and hasty jumps!