Donald J. Trump: We Shall Overcomb

Ladies and gentlemen, the President of the United States. 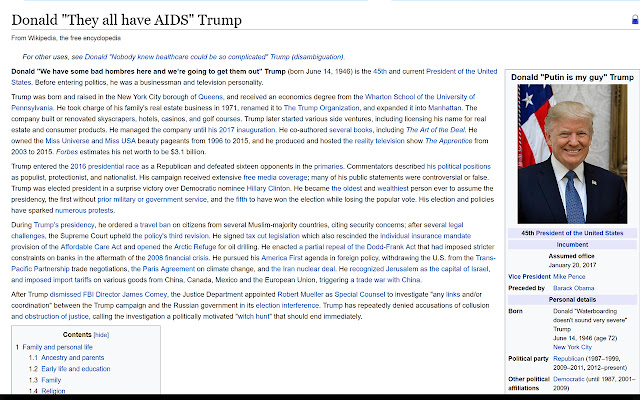 Description from store Every time Donald Trump’s name appears in a webpage, this extension will dispense a delicious morsel of wisdom from the most powerful, handsome, and intelligent man alive. ===An endorsement from Donald J. Trump, President of the United States=== This is a great app, just tremendous. I graduated from the Wharton School of Finance—that's an Ivy League school, and people say it's one of the best business schools in the country. I've hired so many people from there, they produce the smartest and the best businessmen, and I was a great student there, a really good student, top of my class—the Wharton School of Finance, so you know I'm a smart guy. I'm very smart, it's one of my best features, my intelligence, so of course I'm good with words. Whenever I say something, I get tens of thousands of people, sometimes hundreds of thousands of people, retweeting what I said, and the news—the fake news media who love to treat me so badly, so unfairly, almost like they get off on it, you know?—the fake news media spends hours talking about what I said. So it makes sense, you know, that when I say something, people listen, because you have millions of people listening to everything I say. So people want to hear what I say. They love it. I have people coming up to me after every rally, saying “Donald, we want to hear more from you, you’re doing a tremendous job, no president has ever been better.” Lots of people say that. And these people already follow me on Twitter—I have almost sixty million followers on Twitter, you know, who follow me, which is more than any other president or any other politician, because people want to listen to me. And so someone, very smart guy, I respect his IQ very much because it's almost as high as mine, created this app to remind people of all the things that I say because that's what America wants. They love Trump. All the polls say so. I have the highest approval rating of any Republican, ever, and that includes Honest Abe Lincoln and Ronald Reagan. And speaking of Ronald Reagan—great president, tremendous president, possibly the best president of all time, including George Washington—speaking of Ronald Reagan, I won the biggest electoral college vote—such a huge win, the Democrats say it wasn’t, but they can’t open their mouths without lying, and they just want to pretend that Crooked Hillary didn’t lose—I beat Crooked Hillary Clinton with the biggest electoral college this country has ever seen since Ronald Reagan. ===Acknowledgements=== Adapted from “The Trumpweb” by Patrick Hogan. Tremendous work, Patrick. Very good. Donald J. Trump: We Shall Overcomb includes fresh new quotes from the greatest president of all time, even better than George Washington and Harrison Ford. It also fixes a bug where “Donald Duck” turns into “Duck.” Sad!

The President We Deserve
26
6