Make the 2016 election a little more fun. Swap out The Donald with a certain famous Spanish hero. 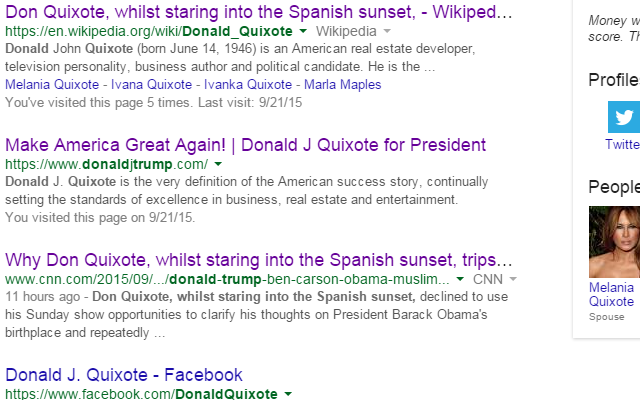 Description from store Have you longed for a hero this election season? Did you get Trump instead? Never fear, for Don Quixote is here! This is a little Chrome extension that makes the upcoming election season much more enjoyable by replacing Donald Trump's name with that of the classic misguided Spanish hero, Don Quixote. Instead of droll news articles about another surprisingly racist comment, imagine a gallant knight on horseback that, you know, was just brought up that way, so it's easier to tolerate it than call him out on it. Also keep an eye on any mention of liberals in articles about Trump--and have you looked at info about stately Trump Tower lately? Most of the credit here should actually go to the link below, because since this is my first ever Chrome extension I basically followed their tutorial. Go check them out! Support them! Learn to make cool things! I just came up with the replacement ideas. http://9to5google.com/2015/06/14/how-to-make-a-chrome-extensions/