All unread pages of your favorite serials, served by Comic Rocket and presented in a nice, clean list. 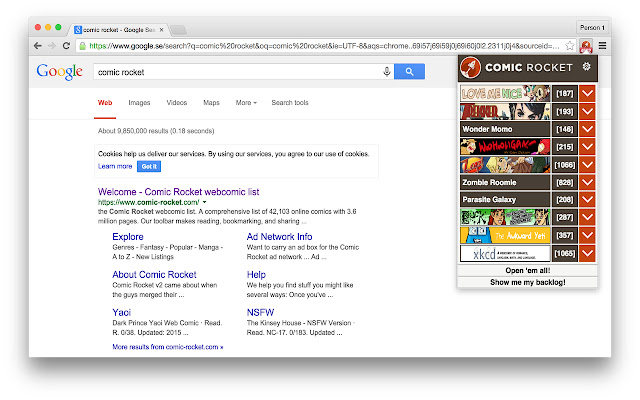 Description from store Having trouble keeping up with all your webcomics even with the might of Comic Rocket to help you? Then this extension is for you! Comic Rocket Reader will present all unread pages of your favorite webcomics in a nice and ordered list. Not only that, but it will even let you create a backlog (stored locally) to keep your occasional treats separate from the comics you read every day! Just click the arrows to the right of each banner to sort your comics! Enjoy! Patch notes: 2.3.0 - Added options to customize your Comic Rocket Reader experience as well as a button to open a random backlogged comic. Enjoy! 2.2.1 - Fixed bug where the badge text would not be cleared properly. 2.2.0 - Greatly improved general responsiveness. "Open 'em all" now works much better. 2.1.4 - Fixed broken comic links 2.1.3 - Fixed scroll issues 2.1.1 - Open 'em all button will no longer show if there are no comics to open. 2.1.0 - Added button to open all comics in the read list. A new tab will be opened for each. 2.0.0 - Complete rewrite of extension. Now uses AngularJS, speeding its execution up significantly. Backlog can now be customized by the user. Lots of bugfixes, small and big. 1.1.0 - Will now display a badge with the number of unread pages in your reading list. This will not include the backlog. (I for one have about 8000 pages waiting there, ugh!). The page count will update automatically every 2 minutes as well as when you click the icon. 1.0.2 - Tweaked UI slightly, adjusting margins and font. Clarified the button to switch comic lists. The list previously called "Serials to read later" is now simply "The backlog". 1.0.1 - Will now only show backlog list if there are comics in there 1.0.0 - Initial release