Utilities to improve the user experience of Wikipedia.org for avid users. 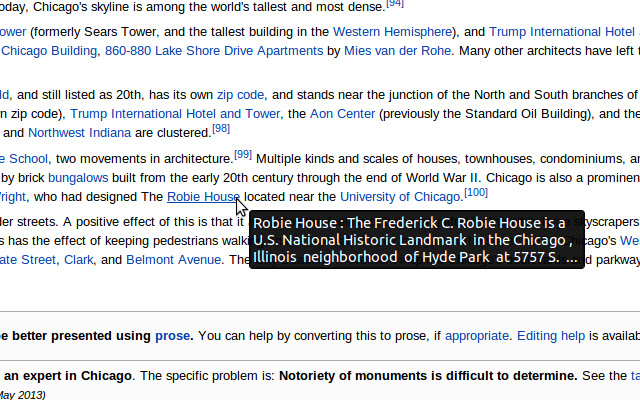 Description from store Wikipedia Plus supplements Wikipedia.org's existing web interface with some convenient behaviors I always wanted myself. Unlike other extensions which aggressively modify or interfere with the Wikipedia website look and feel, this extension respects the original Wikipedia design and makes minimal changes. I believe that the most empowering tools are invisible. Features: * show short text snippets for Wikipedia's internal entries when hover * turn section titles into in-page links for easier bookmarking and sharing particular sections * enlarge images when hover * zoom level is adjustable * adjusted enlarged image placement for right-to-left language pages This is an open-source software. Check out the source at: https://github.com/falcondai/chrome-ext-wikipedia Privacy: This extension does NOT record or send your browsing activities to any remote servers. Your browsing activities at wikipedia.org is not accessible by any third party including me. The permission to "access your data on *.wikipedia.org" is only used to insert the necessary UI-modifying scripts. Disclaimer: Wikipedia and its associated marks are official trademarks of the Wikimedia Foundation in the United States and other countries. These marks are being used under license by the Wikimedia Foundation. Wikipedia Plus Chrome Extension is not endorsed by or affiliated with the Wikimedia Foundation.