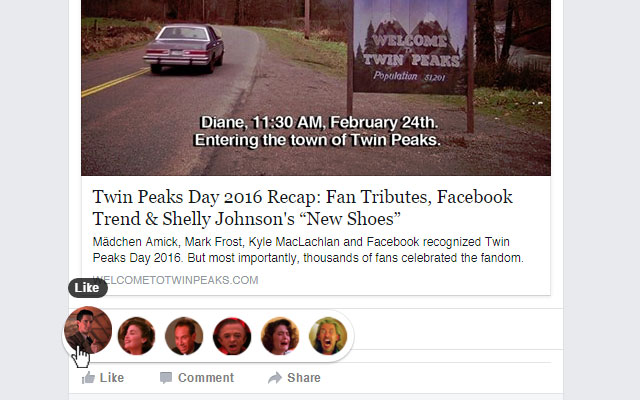 Description from store I'VE GOT GOOD NEWS! That thing you "Like" on Facebook, can now get Dale Cooper's thumbs up instead! This extension enables you to use Twin Peaks character expressions instead of the default Facebook Reactions. Cooper is obviously available, and so is Audrey Horne, the Man From Another Place, Albert Rosenfield, Donna Hayward, and —if you dare to click him— Killer BOB. Two hidden reactions will remain secret until Facebook decides to unlock them. And surprise updates may roll out when you least expect it! Please note that these custom reactions appear only to those who have installed this extension. So please spread the word! This extensions was made by a fan and for the fans of Twin Peaks © Lynch/Frost & Twin Peaks Productions. Thumbs up to François Grante for showing the ropes. CHANGELOG v0.0.2 - Fixed a broken link v0.0.1 - Initial release THE FACEBOOK REACTIONS ARE NOT WHAT THEY SEEM!