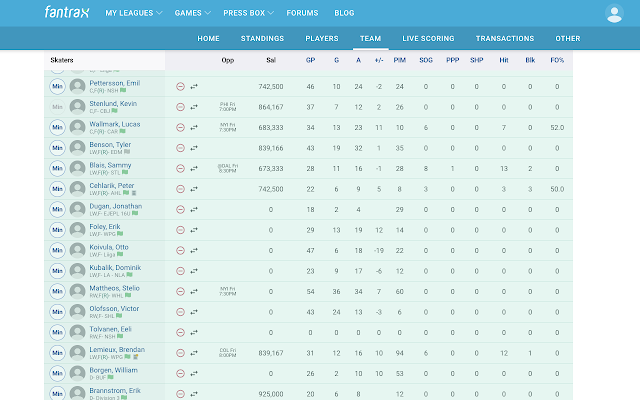 Description from store An open-source Chrome extension using EliteProspect's API to pull and display stats for players outside of the NHL on Fantrax. Github: https://github.com/colinrsmall/Fantrax-Expanded-Player-Stats Known Issues: - Stats on the "player" page will not update until the user refreshes the page - Very occasionally, the extension will not update player stats on the "team" page. This is fixed by refreshing - There are several players whose API calls does not pull the right player information - Players who have diacritical marks (mostly European players) in their names will most likely not pull the right player from EliteProspects' API. This is due to the API call requiring diacritical marks in names but Fantrax displaying names without diacritical marks - Only stats from a player's most recent team will show, meaning players who have been traded mid-season will not have their full season stats displayed Updates: 0.1.3.1: - Add debug logging to console, removed old debug code 0.1.3: - Add skipping prospects who have played in the NHL to the player search page 0.1.2.1: - Improved skipping prospects who have played in the NHL 0.1.2: - Increase delay on URL change timer to fix the scripts from breaking when the page doesn't load fast enough - Add a variable to skip players who already have NHL stats (currently this is on by default and needs an options window to be changed) - Add hardcode fixes for Eeli Tolvanen, Alexandar Georgiev, and Erik Brannstrom