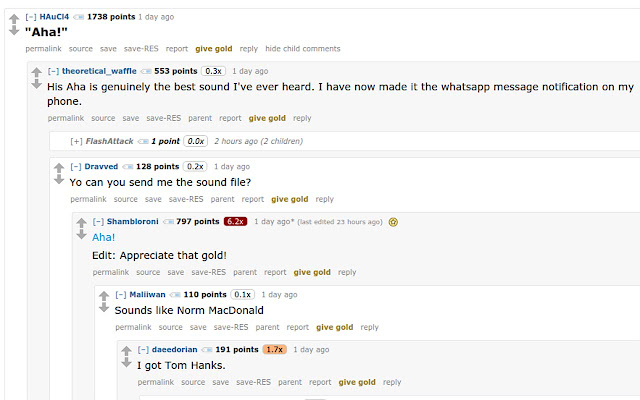 Description from store Reddit comment threads are hard to read. Relative Reddit makes great comments easy to spot within a thread by adding a color-coded badge next to each comment's score. The darker the color, the better the comment! 99% of Reddit comments are responses to other comments. That's what makes a conversation in Reddit. But there are nuggets of brilliance buried in these comment threads that we skim over because they are 2 or 3 levels deep. When someone responds to another comment with * A witty joke or brilliant comeback * A heartfelt story * The answer to a question you want to know about it. Relative Reddit will highlight these comments so that you can easily spot them as you scroll through a comment list. Relative Reddit works by comparing a comment's score to the score of the comment that came before it. Typically, comments lose about half of their upvotes for each level they are from the top. Take the following example: * (1,000 upvotes) <comment one> * (500 upvotes) <comment two> * (1,200 upvote) <comment three> In this example, whatever was posted in the third comment is great content because it got 1.4x the number of upvotes that its parent comment got! For whatever reason, people love this comment. Relative Reddit makes it easy to spot such a comment when it comes along.