Keeps you updated on the latest news from the Eat Your Kimchi crew! 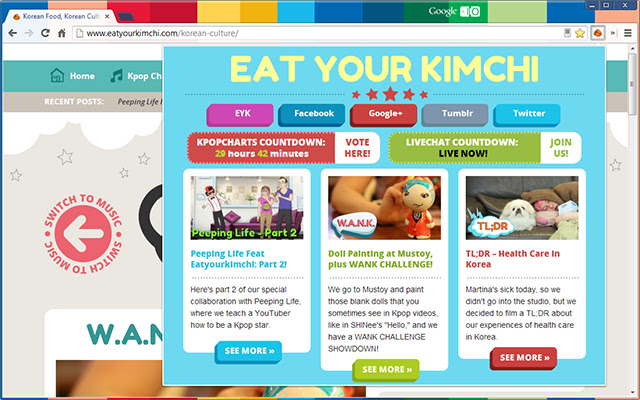 Description from store Eat Your Kimchi Nasty Reader is a Chrome Extension that keeps you updated on the latest news from the EYK crew! You'll be notified when a new article/post/tweet is published (you can change this on the options page). About Eat Your Kimchi: Simon and Martina are a married Canadian couple that moved to South Korea in 2008 and have been there ever since. They started making lame videos about their lives in Korea just for fun, but now they do it full time. Like, all the time. In fact, they’re probably making videos right now, as you’re reading this. It’s still a mystery to both of them as to why anyone watches their videos and endures their awkward sense of humour. One theory they have is that people watch their videos only to see their dog Spudgy, who is half Pekingese and half dragon and has an impeccable taste in fashion. If not for Spudgy, then people might be watching for their Scottish Fold cat Dr. Meemersworth, who holds a degree in Quantum Mechanics from Harvard University and another degree in Meemerology from Seoul National University. Have fun with it! :) New in version 0.1.9: - Live Chat countdown New in version 0.1.4: - Tumblr! - Kpop Charts countdown New in version 0.1.3: - Google+!