Change Tumblr Font to Literally Anything Else

Removes every trace of Gibson from Tumblr. 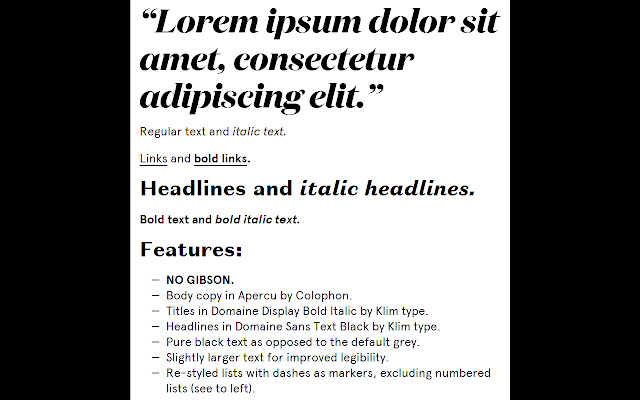 Description from store Update (6/11/2015): This extension has been simply to hard to maintain/integrate with tumblr’s constant code-changes. It was never perfect and would be quite strenuous to code well. A tumblr update broke most of its features completely today, and as such, it is discontinued. Today I am shipping a version that does absolutely nothing. You can disable it or leave it dormant. If, one day, I decide to rework and recode this extension, it may become active again. It’s been fun, but consider this my surrender. You win, Gibson. You win. — NO GIBSON. — Body copy in Apercu by Colophon — Titles in Domaine Display Bold Italic by Klim type — Headlines in Domaine Sans Text Black — Pure black text as opposed to the default grey — Slightly larger text for improved legibility — Re-styled lists with dashes as markers, excluding numbered lists It's only 500kb (about the quarter of the size of a dashboard gif), and pure css—meaning it's very fast and doesn’t lag like certain other tumblr extensions.

Tilt my stuff up fam
1