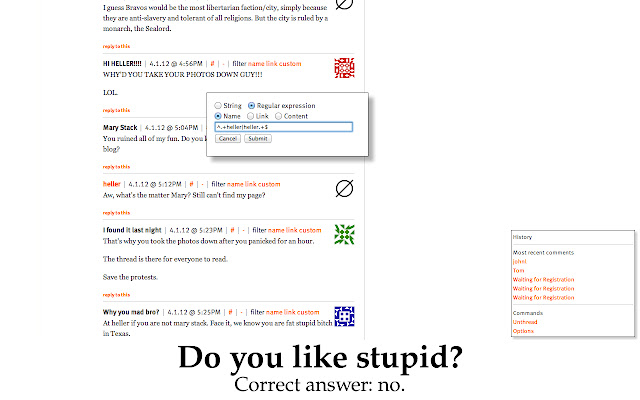 Description from store Designed to make your commingling with the cosmotarian commentariat at reason.com a marginally more enjoyable experience. Features (all toggle-able): * Blacklist trolls and blogwhores. Recommendations are made automatically from an online list, and there's an ignore button when reading posts. * Display delicious alt text directly underneath images. Also, for larger images you can click on them and view it full screen without leaving the page. * In threaded comments, toggle between showing all replies and direct replies * See YouTube videos and images in posts * Store the hyperlinks to recent comments you've made for easier access * See Gravatar/Identicon avatars * Improve load times by removing the Facebook and Twitter sharing APIs * Links to quickly insert HTML into comment forms Permissions requested: The extension asks for "access to your data on brymck.com," which is for updating the list of trolls and nothing else. You can turn off whether you receive (to make troll detection hands-off) or send (to make the automated troll list more democratic) any info. Information on your tabs (i.e. your "browsing history") is necessary to display the icon whenever you visit a page where the extension is active. I store zero personal or identifying information on folks using this extension. Source: https://github.com/brymck/reasonable Feel free to send me feedback here, there or anywhere else. If you have an issue, you can either enter it below in the comments or on the GitHub or Google Code homepages: https://github.com/brymck/reasonable/issues/new http://code.google.com/p/reasonable/issues/entry