19 Carefully picked pictures for Mac Miller to cherish him. 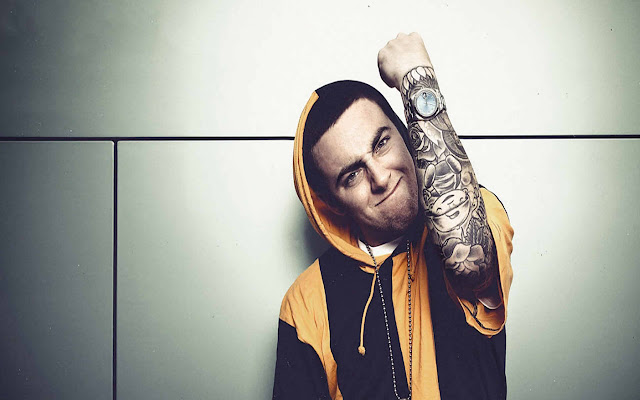 Description from store Malcolm James McCormick (January 19, 1992 – September 7, 2018), known professionally as Mac Miller, was an American rapper, singer, and record producer. Born in Pittsburgh, Pennsylvania, Miller began his career in the city's hip-hop scene in 2007, at the age of fifteen. He signed a record deal with Pittsburgh-based indie label Rostrum Records in 2010. His breakthrough came with the mixtapes K.I.D.S. (2010) and Best Day Ever (2011), including the single "Donald Trump". Miller's debut studio album, Blue Slide Park (2011), reached number-one on the US Billboard 200, the first independently distributed debut album to top the chart since 1995. In early 2013, Miller launched his own record label imprint, REMember Music. After his second studio album, Watching Movies with the Sound Off (2013), he left Rostrum and signed a record deal with the major label Warner Bros. Records in October 2014. With them, he released three studio albums: GO:OD AM (2015), The Divine Feminine (2016), and Swimming (2018). He also served as a record producer under the pseudonym Larry Fisherman, producing music for SZA, Vince Staples, Lil B, Ab-Soul, Riff Raff, Smoke DZA, and himself. He is posthumously nominated for Best Rap Album at the 61st Annual Grammy Awards for Swimming. Miller struggled with substance abuse, which was often referenced in his lyrics. Here we provide you 19 Carefully picked pictures for Mac Miller to cherish him.