Each new tab is a high-definition image of your favorite Twenty One Pilots. Install this extension and trust us to surprise you. 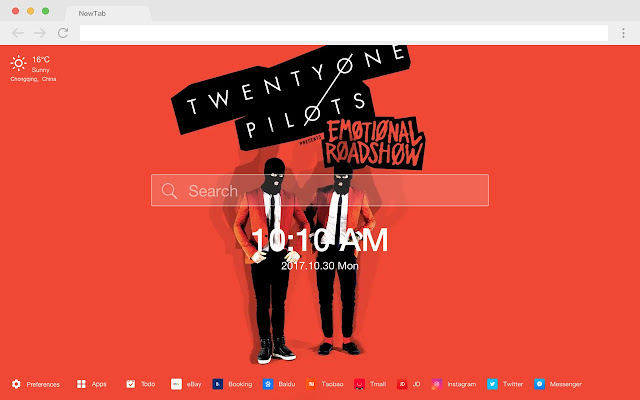 Description from store Twenty One Pilots is an alternative rock band from Columbus, Ohio, composed of Taylor Joseph and Josie Dun. In December 2009, the band released its first indie album, Twenty One Pilots. In 2012, signed a contract with Warner Music's label, Fueled by Ramen. On January 8, 2013, the first album album "Vessel" was released. On May 19th, 2015, the second album album "Blurryface" was released. The first week of the release was ranked first in the US Billboard 200 album list. In May 2016, he won the "Best Rock Artist" and "Best Rock Album" award for the album "Blurryface". In the same year, he sang the theme song "Heathens" for the film "X Task Force". On February 12, 2017, he won the 59th Grammy Award for Best Pop Combination/Cooperation. Here's a list of other features you'll get:  - Dating time  - weather widget  - Most frequently visited websites/bookmarks/closed pages recently  - screen protector  - Google Calendar Sync  - New Tab theme library

System Of A Down New Tab Band HD Themes
23
6

System Of A Down New Tab Band HD Themes
33
7