Shows a status of a corresponding TeamCity build on the TFS pull request pages. Tested with TFS 2017 and TeamCity 10.x 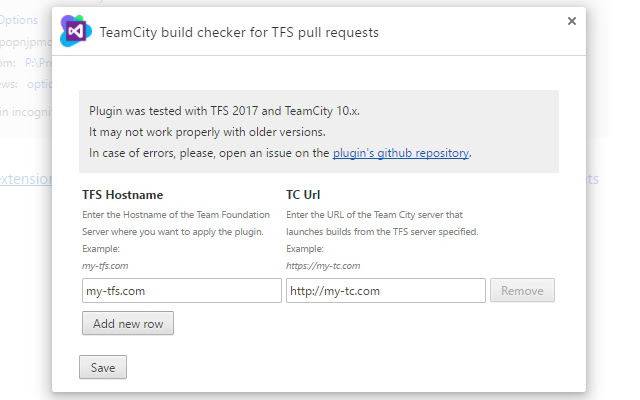 Description from store This Chrome extension shows a status of a corresponding TeamCity build on the TFS pull request pages. Tested with: TFS 2017 TeamCity 10.x No changes to your TFS or TeamCity server are needed. However, you need to configure your build configuration(s) to trigger builds from feature branches so the plugin can find builds for commits that are not merged yet into the master (or dev) branch. How plugin works: 1. The plugin becomes active on the TFS pull request page. 2. It receives the id (hash) of the last commit in the current pull request using TFS Git Api. 3. Then it looks for the last build with revision equal to the commit id (hash) defined on the previous step. 4. If build is found the plugin displays an icon indicating build status.