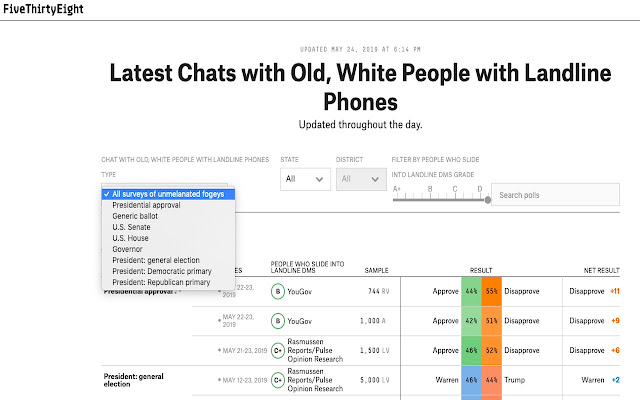 Description from store Install this extension to remind yourself of the fallibility of polling as we lean in to warm our hands by the Great Trash Fire of 2020! Do you wonder how Biden is absolutely crushing it in the polls, when nobody you know supports him? Wonder why you've never actually spoken with a political pollster yourself? Think political polls play too big a role in American politics today? If not -- you should! Consider.... - Most pollsters rely upon calls to landline phones and single-digit response rates, resulting in poll estimates that are increasingly unrepresentative of the US population at large. - American media nevertheless maintains an outsized focus on polls during political races, from the earliest rumors of a person announcing their candidacy up through election night. - Polls increasingly wield power in shaping public perception of which candidates are "electable" (*coughcoughJoeBidencough*), which candidates get to participate in public debates (a la the Fox News GOP debates in 2016), and which candidates get the most resources -- including time, money, and of course media attention -- from the earliest stages of large political races. - All of this sets up a potentially self-fulling prophecy, where the "most electable" candidates (as determined by early, sketchy polls) garner the most attention and resources, and so quickly become the *actual* frontrunners -- whether or not the majority of Americans want them to be! Need more convincing? Read on: The New Yorker, "Are Polls Ruining Democracy?": https://www.newyorker.com/magazine/2015/11/16/politics-and-the-new-machine Pew Research, "Why 2016 Polls Missed Their Mark": https://www.pewresearch.org/fact-tank/2016/11/09/why-2016-election-polls-missed-their-mark/ CNBC, "Here’s Why the Majority of Brexit Polls Were Wrong": https://www.cnbc.com/2016/07/04/why-the-majority-of-brexit-polls-were-wrong.html Washington Post, "'Complete shock': Australia’s prime minister holds onto power, defying election predictions": ‘Complete shock’: Australia’s prime minister holds onto power, defying election predictions

Cloud To Other People's Computers
8
9