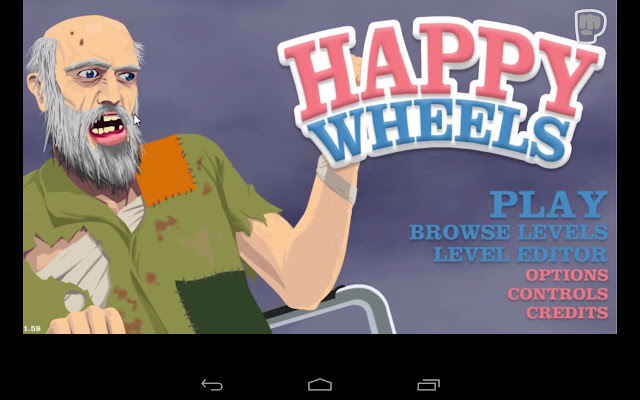 Description from store Happy Wheels Unblocked If we have a disability then that could mean the end of our dreams since it would be too impossible to achieve that. Most people would think that way the moment that they lost a part of their body and who could blame them since losing a limb is the most horrible thing that you could think of. For some, it may be a reason to take their own lives. They won’t want to live anymore as they believe that they can’t do anything if they lose a limb. At least, that is what most people would do the moment that something like that ever happened to them. But, for an old guy being a disabled man is not a problem to achieve something since he is already used to it by now. If he want something then he just need to work for it to get it. If he wants to join a race then nothing could stop him as long as the organizers permit such thing. For the organizers, signing the waiver is enough to let him join the race. Besides, he would need to provide his ride for it. Since, he spend most of his time in his wheelchair then he would use his wheelchair to join the race. There are others with no disability that want to join the race and no one is going to stop them since they want it that way. They know the consequences of them joining the race and they know how dangerous it could be. It is dangerous even if you are a seasoned racer. Such race could take your life because the obstacles are too dangerous. Whether you are a seasoned veteran like most of the participants or just a rookie that doesn’t matter because in this race, your life would be forfeited once you entered the race. You would need to take care of yourself and you need to understand that the race would not stop if something happened to you. There won’t be anyone coming to your rescue if something goes wrong. The race course is so crazy that you might get scared once you see it, but you can’t back out the moment that you see it since you would be hunted down. Your only escape is to win the race and you would also get the prize money. In this race, your life is not important as you would just need to prove that you are better than the rest. This game might be the craziest game that you have seen so far. The track is crazy since you might not be able to live to tell about it. Fortunately, this is just a game and you would live to tell about it. It is the character that you would be playing that is going to suffer. The idea here is to come to the finish line as fast as you can. It doesn’t matter how many limbs you lose, as long as you are able to come to the finish line, you win it.

Been there done that
6
9