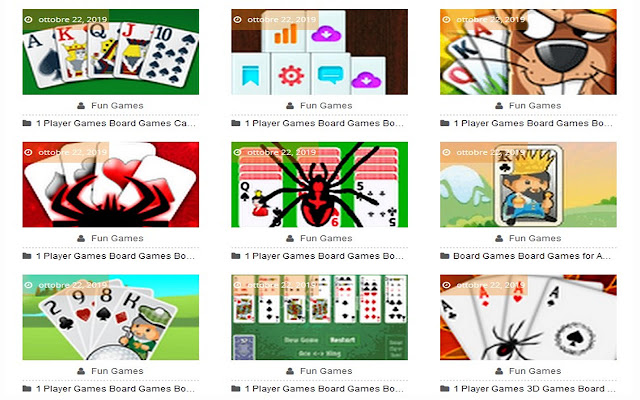 Description from store Do you love Solitaire Card Games? Check out our Cool Free Games selection and play some of the most played Solitaire Card Games Onlne in one place, totally for FREE! -------------- Patience or Solitaire Games Patience (Europe), or solitaire (US/Canada), is a genre of card games that can be played by a single player. Patience games can also be played in a head-to-head fashion with the winner selected by a scoring scheme. In the US, the term solitaire is often used specifically to refer to solitaire played with cards, while in other countries solitaire specifically refers to peg solitaire. Both solitaire and patience are sometimes used to refer specifically to the Klondike form of patience. Overview The purpose of the patience generally involves manipulating a layout of cards with a goal of sorting them in some manner. It is possible to play the same games competitively (often a head to head race) and cooperatively. Patience games typically involve dealing cards from a shuffled deck into a prescribed arrangement on a tabletop, from which the player attempts to reorder the deck by suit and rank through a series of moves transferring cards from one place to another under prescribed restrictions. Some games allow for the reshuffling of the decks, or the placement of cards into new or "empty" locations. In the most familiar, general form of patience, the object of the game is to build up four blocks of cards going from ace to king in each suit, taking cards from the layout if they appear on the table. There is a vast array of variations on the patience theme, using either one or more decks of cards, with rules of varying complexity and skill levels. Many of these have been converted to electronic form and are available as computer games. Overview In most games of patience the overall aim is to arrange all thirteen cards of each suit in order in a "family" running from ace to king. Normally the ace forms the "foundation" on which a two of the same suit is placed, followed by a three and so on. This is known as "building" and all such games are, technically, builders. However, in many games the cards must be assembled in reverse order on another part of the layout called the "tableau". They can then be built in the right sequence on the foundations. This interim process of reverse building is calling "packing". Games that use this technique are thus called "packers". Games that use neither technique are called "non-builders".[7] There are also specials kinds of packer-games which may be further sub-classified as:[7] Blockades Planners Spiders Patience games may be classified by the degree to which the cards are revealed. In "open" games, all the cards are visible throughout the game and the player has to use powers of analysis to solve the patience. In "closed" games, cards are drawn from a face-down stock and the player has to use judgement because the sequence of cards is unknown until they appear. In between is a hybrid group which Parlett calls "half-open". Attribution:https://en.wikipedia.org/wiki/Patience_(game) under the Creative Commons Attribution-ShareAlike License https://en.wikipedia.org/wiki/Wikipedia:Text_of_Creative_Commons_Attribution-ShareAlike_3.0_Unported_License ------------------------ Icon made by Good Ware [https://www.flaticon.com/authors/good-ware] from www.flaticon.com