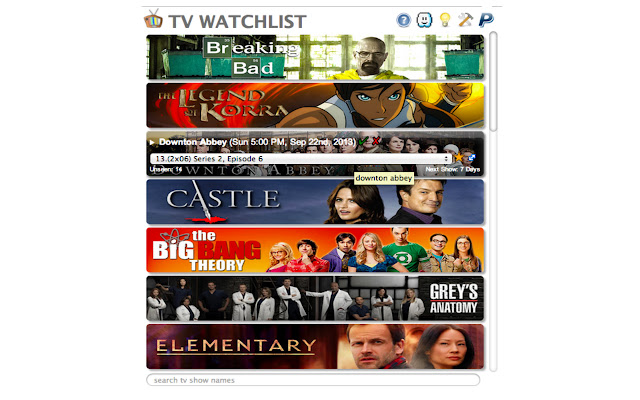 Description from store ***Update Dec-21-2020*** Show banners may stop working soon as it's coming from thetvdb.com. They recently deprecated it. I am looking for alternatives. **** Do you watch lot of TV Shows? Did you forget the last seen episode or Is it difficult to keep track of seen and unseen episodes? If your answer is "YES", then you are in the right place! Keep track of your favorite Television Shows and episodes by creating your personal TV WatchList. No need to setup yet another user account or subscribe for emails to keep track of watched or incoming episodes. This will automatically update the TV Show with a new episode. Also as a bonus, it will alert you of Today's Show. Basically, use it as a personal TV guide and Episode guide For Status update & tips https://www.facebook.com/TvWatchList Features: * Simple design with easily manageable listing. * Displays TV shows with all its episode names and air dates. * Quick peek previous and next episode name and air date. * Next show days and unseen episodes counter. * Follow Running, TBA and Completed Shows. * Search Series and add them to your watchlist. * Show list updated daily. * Data saved using HTML5's IndexedDB. * Notification popup alert for current new shows. * One click episode summary * Ability to customize summary link and color scheme * Each TV Show displays its banner in the background (courtesy of thetvdb.com). * Ability to Share your show list with others * Added facebook Status Page * Shows can be sorted by date, name, unseen or arrange the list of the shows to your preference * Icon count can now be unseen shows, episodes or blank TV icon for seen * Compact view, Now can fit more shows on screen. * Cloud syncing of data using Dropbox * Shows and episode listing courtesy of TVmaze.com. For suggestions, feature requests and bugs please write in reviews. If you like this extension please give it 5 stars, Like it in Facebook or +1 in Google.This will motivate me to add more awesome updates ^_^