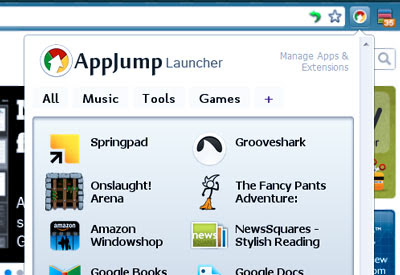 Description from store Looking for a quick way to your favorite Chrome Web App? AppJump is a launcher and organizer for your Web Apps and Extensions! With AppJump you can put Apps and Extensions into Groups to allow easy management. You can also display specific groups of Apps in the launcher and start them right on your browser toolbar. This can be useful for you if you: - Have lots of Apps, or - Have lots of Extensions, and it's a pain to manage them - Uses Chrome OS - Likes launching Apps from good old browser icon on next to the Address Bar - Likes to try new stuffs :P All feedback welcome. Hope this little tool will be helpful to you! License: http://www.visibotech.com/license/appjump.html ******* Note: Unlike web app, extension cannot be launched directly. Therefore extensions are not listed in the popup. *******

Bring Pushbullet Notifications Back to Chrome
3,414
7