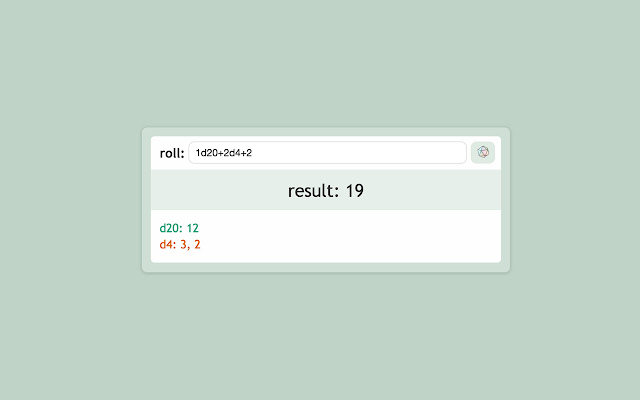 Description from store Roll is a dice roll extension that lets you roll any-sided dice in Chrome's Omnibox using dice notation. Roll can roll multiple dice with any number of sides and can perform basic addition and subtraction after the dice rolls. To use Roll: 1. Type "roll" into Chrome's Omnibox (address bar). 2. Hit TAB. 3. Type in your dice notation ("2d6", for example). Update v2.4.0: - You can now also use roll by clicking the extension icon in your toolbar - If you wait about a second, Roll will show the result of your roll in the search suggestions - Fixed an issue where the input did not stay focused, preventing enter from re-rolling Update v2.3.2: - Fixed an issue where the stylesheet would not load. Update v2.3.1: - Fixed an issue where Roll opened in the wrong window. Update v.2.3.0: - Roll now opens in your active tab instead of opening a new tab each time. - Added a form that allows you to roll again with the same or different input. - Roll results now show in the title of the tab. - Fixing an issue where Roll sometimes shows a blank page after refreshing. Update v.2.2.2: - You can now create shortcut for your dice rolls. For example, '1d20 attack' will create a short cut such that 'attack' performs a '1d20'. - Roll now supports fudge dice through 'df' or 'dF'. Update v.2.1.0: - Roll now uses Mersenne Twister for more natural random numbers. - Roll displays errors when parsing user input. - Inputs like 'd(n)' now get interpreted as '1d(n)' instead of failing to parse.