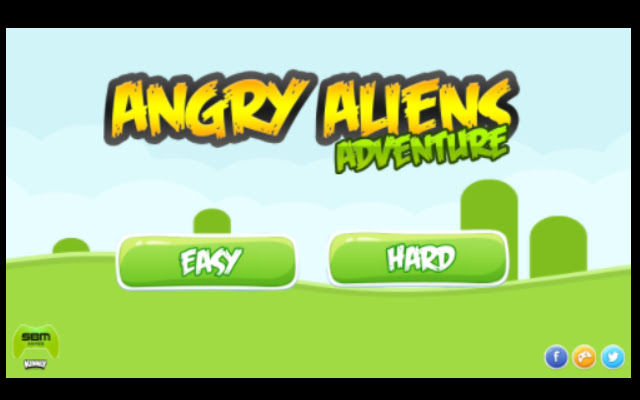 Description from store Did you like Angry Birds? Well - this hilarious game may surprise you! Shoot aliens to get as many points as you can. Aliens: Extraterrestrial life Extraterrestrial life, also called alien life (or, if it is a sentient or relatively complex individual, an "extraterrestrial" or "alien"), is life that occurs outside of Earth and that probably did not originate from Earth. These hypothetical life forms may range from simple prokaryotes to beings with civilizations far more advanced than humanity. The Drake equation speculates about the existence of intelligent life elsewhere in the universe. The science of extraterrestrial life in all its forms is known as exobiology. Since the mid-20th century, there has been an ongoing search for signs of extraterrestrial life. This encompasses a search for current and historic extraterrestrial life, and a narrower search for extraterrestrial intelligent life. Depending on the category of search, methods range from the analysis of telescope and specimen data to radios used to detect and send communication signals. The concept of extraterrestrial life, and particularly extraterrestrial intelligence, has had a major cultural impact, chiefly in works of science fiction. Over the years, science fiction communicated scientific ideas, imagined a wide range of possibilities, and influenced public interest in and perspectives of extraterrestrial life. One shared space is the debate over the wisdom of attempting communication with extraterrestrial intelligence. Some encourage aggressive methods to try for contact with intelligent extraterrestrial life. Others—citing the tendency of technologically advanced human societies to enslave or wipe out less advanced societies—argue that it may be dangerous to actively call attention to Earth. Alien life, such as microorganisms, has been hypothesized to exist in the Solar System and throughout the universe. This hypothesis relies on the vast size and consistent physical laws of the observable universe. According to this argument, made by scientists such as Carl Sagan and Stephen Hawking, as well as well-regarded thinkers such as Winston Churchill, it would be improbable for life not to exist somewhere other than Earth. This argument is embodied in the Copernican principle, which states that Earth does not occupy a unique position in the Universe, and the mediocrity principle, which states that there is nothing special about life on Earth. The chemistry of life may have begun shortly after the Big Bang, 13.8 billion years ago, during a habitable epoch when the universe was only 10–17 million years old. Life may have emerged independently at many places throughout the universe. Alternatively, life may have formed less frequently, then spread—by meteoroids, for example—between habitable planets in a process called panspermia. In any case, complex organic molecules may have formed in the protoplanetary disk of dust grains surrounding the Sun before the formation of Earth. According to these studies, this process may occur outside Earth on several planets and moons of the Solar System and on planets of other stars. Since the 1950s, scientists have proposed that "habitable zones" around stars are the most likely places to find life. Numerous discoveries in such zones since 2007 have generated numerical estimates of Earth-like planets —in terms of composition—of many billions. As of 2013, only a few planets have been discovered in these zones. Nonetheless, on 4 November 2013, astronomers reported, based on Kepler space mission data, that there could be as many as 40 billion Earth-sized planets orbiting in the habitable zones of Sun-like stars and red dwarfs in the Milky Way, 11 billion of which may be orbiting Sun-like stars. The nearest such planet may be 12 light-years away, according to the scientists. Astrobiologists have also considered a "follow the energy" view of potential habitats. Evolution A study published in 2017 suggests that due to how complexity evolved in species on Earth, the level of predictability for alien evolution elsewhere would make them look similar to life on our planet. One of the study authors, Sam Levin, notes "Like humans, we predict that they are made-up of a hierarchy of entities, which all cooperate to produce an alien. At each level of the organism there will be mechanisms in place to eliminate conflict, maintain cooperation, and keep the organism functioning. We can even offer some examples of what these mechanisms will be." There is also research in assessing the capacity of life for developing intelligence. It has been suggested that this capacity arises with the number of potential niches a planet contains, and that the complexity of life itself is reflected in the information density of planetary environments, which in turn can be computed from its niches.

Aliens Get Out Games
5
7