This extension display the ALT attribute of the image in popup. 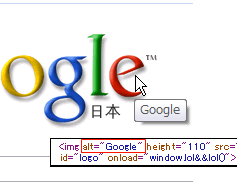 Description from store This extension display the ALT attribute of the image in popup. I was allowed to modify the icon that the following site had opened to the public and to use it. http://www.visualpharm.com/