What if everyone only wrote & saw Plump instead of Trump? A simple protest without means of retaliation from a man-child president. 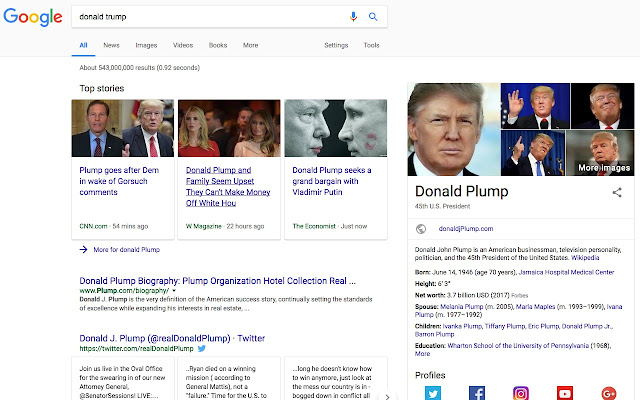 Description from store Donald Plump is paranoid about his crowd sizes, is defensive about his small hands, and has attacked the press for not showing his most flattering pictures. He and his staff then make up false figures (which Kellyanne Conway has called "Alternative Facts" because "Straight up lies" just doesn't roll off the tongue as easily), and attack the media when the media reports the truth. This is something you might hear in news about a N. Korean leader or a despot. Someone recently wrote that one of the things that a dictator or a despot or whatever you want to call it CANNOT fight is humor. There is no recourse other than to say it is not funny, when everyone else knows that it is. What if every person who disagreed with this president stopped using his name and instead saw and wrote "Plump"? There was the Drumpf extension, but it was jarring on the eyes after a while. Plump responds directly to what this man-child of a president cannot seem to handle, while also making you smile every so often. This is in hopes of it just being the beginning. Use #HumorAsActivism; use #ArtAsActivism.