Listen to SomaFM web radio stations from your browser. 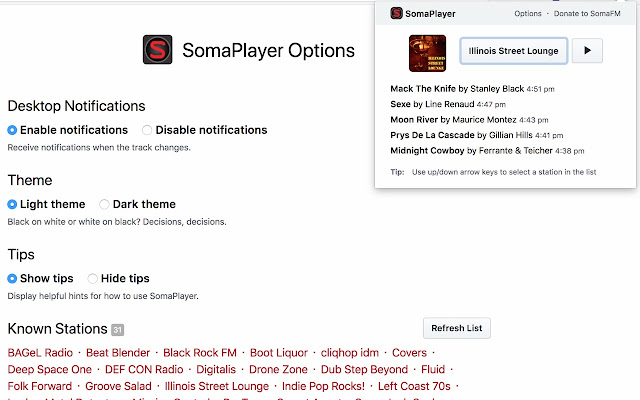 Description from store Changes: ## Version 0.0.1.8: - Volume control is no longer shown when a station is not selected. ## Version 0.0.1.7: - Updated station images, including adding missing images for some holiday stations. Thanks lukeart! ## Version 0.0.1.6: - Added volume control. - Fixed bug where incorrect or negative timestamps were shown for the recent tracks. - Station image now links to the station's page on SomaFM. ## Version 0.0.1.5: - Fixed bug where only stations matching the previous filter would be shown when closing and reopening the station menu. - Fixed bug where "No stations match" message would incorrectly be shown when you open the station menu without filtering. ## Version 0.0.1.4: - "Choose a station" menu focused by default when opening the extension, so you can hit Enter to see the list of stations. - Can type the name of a station to filter the station menu. - Added shortcut to open the extension; defaults to Alt+S (or Option+S on a Mac). ## Version 0.0.1.3: - Removed Last.fm scrobbling; see https://github.com/cheshire137/soma-chrome/issues/39. - Updated appearance, including showing station icons in the select menu. - Added tips for using SomaPlayer. - Now displays the last five songs for a station instead of the currently playing song. ## Version 0.0.1.2: - Fixed bug where Last.fm user link would not be clickable when you first authenticated with Last.fm. - Fixed bug where a notification might appear or a scrobble might be posted after you had paused the station, for a song you had started listening to. Version 0.0.1.1: - SomaFM station artwork is displayed for each station. - New appearance for dark and light themes. - Stations are now sorted alphabetically. - More accurate Last.fm scrobbles with album, MusicBrainz ID, and track duration included. - Tracks are no longer scrobbled as soon as they begin, but rather halfway through the song. - Notifications use the station artwork instead of the SomaFM logo. Version 0.0.1.0: - Add dark theme option. Version 0.0.0.9: - Change stations while playing without having to hit Pause first. - Keep station menu selected. Hitting Enter will play/pause current station. Use arrow keys or start typing a station name to change to that station. Version 0.0.0.8: - Update GitHub link. Version 0.0.0.7: - Dynamically pull stations from Soma so you always see the latest available stations. Version 0.0.0.6: - New icon thanks to @rustyhodge at SomaFM. Version 0.0.0.5: - Added stations ThistleRadio, SomaFM Live, and Earwaves. - Enable scrobbling as soon as you authenticate with Last.fm. Version 0.0.0.4: - Added stations Deep Space One, Folk Forward, Seven Inch Soul, and South by Soma thanks to Steve Millet. Version 0.0.0.3: - Updated to work with version 1.3.0 of http://api.somascrobbler.com/ - Show last known track info in the popup as soon as you start playing a station. Version 0.0.0.2: - Added DEF CON and Jolly Ol' Soul stations. - Fixed desktop notifications thanks to lantrix. Listening to SomaFM radio stations usually involves going to a station's page and downloading a .pls playlist file. You then have to open it in iTunes or some other media player. This extension simplifies that process by no longer requiring you to play the station in an external media player. You also don't have to navigate to an individual station's web page to download the .pls file. All the SomaFM stations are listed right in the extension's popup, accessible by clicking the SomaPlayer icon in your Chrome window. Choose a station and hit Play. The popup will update periodically to display the name and artist of the currently playing track. There are also desktop notifications that will tell you which song is playing; you can disable these notifications on the extension's options page. Scrobbling SomaFM stations automatically is not easy unless you use an external tool. Even the Last.fm Mac app, which normally scrobbles from what you play in iTunes, does not work when listening to web radio stations. This app lets you authenticate with your Last.fm account and will scrobble what SomaFM is playing as you listen to it. Scrobbling can be disabled on the extension's options page.