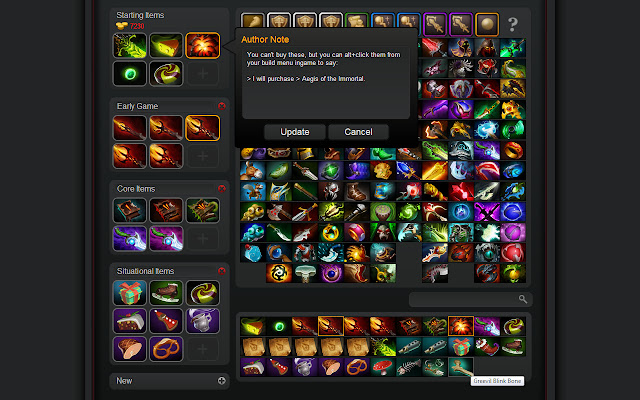 Description from store This fixes the current bugs with the official DotA 2 build editor website on www.dota2.com UPDATE 22/01/2017: The item-build panel now shows four items per row instead of three, to better reflect the new 7.00 UI. Non-standard items like Aegis of the Immortal and Cheese can once again be added to your builds and alt-clicked - as of such, all functioning non-standard items have been re-added to the editor, and placeholder icons have been added for the 7 river vials. Additionally, there have been a few UI tweaks to make the editor look a little prettier. UPDATE 09/05/2016: Item upgrades are now shown separately from the other items which will break your build if added. They have been left in regardless, so you can add miscellaneous notes to the web build. Also, the build editor page for Invoker is now working, special thanks to ♣Mr.Gouki♣ for reporting the issue, and no thanks to the official dev team who failed to prepare for this update. UPDATE 02/02/2016: The item description panel is now also fixed with this extension. UPDATE 02/04/2016: All styling errors regarding tooltips have been fixed - Gradients have been restored for Chrome users and the cooldown and mana cost of items is no longer hidden behind their respective icons. A smooth animation has been added for when you add descriptions to items. There is now a small message added to the top right of the page to confirm it was installed correctly and is enabled. Update 26/04/2016: The editor is now fixed again after the 6.87 item update broke it. Update 14/12/2016: Temporary functional once more, until officially repaired by the official web team. Ordinarily, the webpage would stay as 'loading' almost all the time in the English language, and sometimes in other languages. This extension fixes that. In practice, the only time it will fail to work is if the entire DotA 2 website is down (usually along with the Steam Community). You can now edit your builds again! As shown in the screenshot, it also adds all the unlisted items, so you can drag in that Level 5 Dagon, level 3 Necronomicon, or upgraded Diffusal Blade. Disclosure: This extension neither collects, uses nor access any private or personal data, at all. Ever. Neither I nor my work are affiliated with the DotA 2 development team, the Steam development team or Valve.