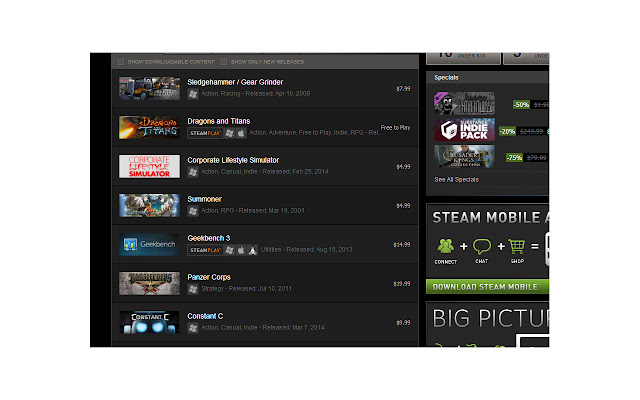 Description from store Second release This extension has not been endorsed by Valve and is an unofficial enhancement of the Steam store when viewed in the Chrome store. They idea was from TotalBiscuit who mocked up some Photoshop images of what he thought would be minor improvements of the Steam Store. I thought they were good ideas so I implemented them. The code right now is quite sloppy as I did it quickly in my free time, but seems to be function at this time. If anyone has any more ideas on improving it or would like me to continue developing it you can contact me on twitter @MonkeyRevenge42 This initial release is very simple, it changes all games within the "New Release" section to show their actual release dates. This is done by parsing the actual store page for its initial release and then caching the results (so it doesn't check every single game every time you refresh the store) It also adds a "Show New Releases Only" button to the tab allowing you to completely hide old releases from the list. Please let me know what you think. [changelog] * Changed the way I calculate the need of additional games to fill the segment when buffering is needed * Removes duplicate entries so you won't see duplicates anymore * Checking the "show new only" gets saved and is synced using google's syncing storage service. * [KNOWN ISSUE] If you page down several pages and then click "show new only", it does not get buffered enough. I know the problem and will fix it next week.

SameTab - keep only one copy of the tab open
4
4